Mermaid could vanish unless we pay £8,000 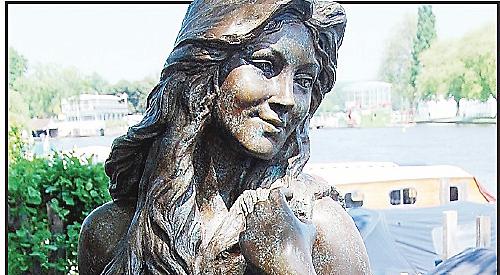 THE mermaid statue at Red Lion Lawn in Henley could be taken away after the town council was asked to pay for it.

The 6ft 6in bronze sculpture has been on loan to the council since 2013 and was supposed to be sold after five years and replaced with another piece.

But when the council contacted the owner about the costs of re-instating the statue after it was vandalised in November, they said they would prefer the council bought it.

Under the previous agreement the statue was to be sold for at least 15,000 euros with 5,000 euros going to a local charity.

Now the council has been offered it at a reduced fee of about £8,800, minus £780 salvage costs after it was thrown into the river.

The owner indicated that the change of heart was due to “personal” reasons.

The issue was discussed at the council’s town and community committee. Mayor Glen Lambert said: “I am rather ashamed that it took me about six years after moving to Henley to discover Red Lion Lawn and when I did she had always been there and now she is missing I want her back.

“In recent meetings quite a lot has been made of taxpayers’ money — and quite rightly so — so I hope someone can persuade me.”

Councillor Sarah Miller said: “I have grown to really like this mermaid. I can’t imagine her not being there.”

She said she knew of a company which wanted to sponsor something in the town centre and she was willing to speak to it about the mermaid.

Councillor Sam Evans, who initiated the original statue deal, said: “It is fantastic news to hear that there may be a possible sponsor. I know it is not as core to our remit as allotments but at the end of the day it is another contribution to the wonderful appeal of our town. I do believe it is worth some taxpayers’ money.”

Deputy Mayor Ken Arlett said: “If I remember correctly I thought it is of nil value to the town council after so many years. I thought that was the selling point.”

Councillor Ian Reissmann said he didn’t “particularly like” the statue but it would be wrong to spend so much money on it anyway.

He said: “To pay £8,800 for the statue when we were promised it wouldn’t cost us anything is wrong.”

The committee agreed to try to find a sponsor for the statue.