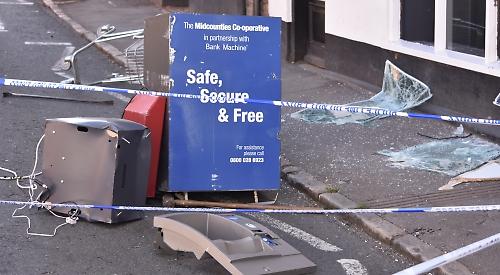 RAIDERS smashed the windows of a Watlington convenience store and dragged a cash machine into the street before attempting to steal the contents.

The Co-operative in Couching Street was targeted just before 2am this morning (Thursday).

It understood three to five people wearing balaclavas used a sledgehammer and a crowbar to break into the business.

Shards of glass were scattered across the road with the cash machine in several pieces in the road.

The crowbar and sledgehammer had been left at the scene.

Long queues began to form this morning during rush hour.

Officers cordoned off the scene and were directing traffic while waiting for forensics officers to arrive.

The Co-op has handed its in-store CCTV footage to the police.

A spokesman for Thames Valley Police said a man has been arrested in connection with the incident.

He said: “Following a lengthy pursuit through Oxfordshire and Gloucestershire, involving officers from Thames Valley Police and Gloucestershire Constabulary, and support of National Police Air Service, a 20-year-old man from Cheltenham was arrested on suspicion of burglary.

“He remains in police custody at this time.”