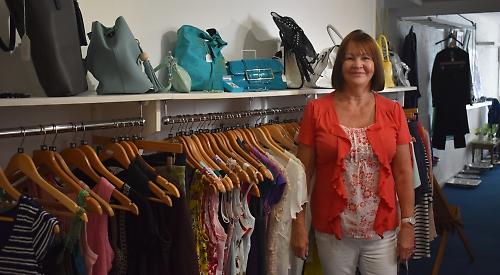 TWO friends have opened a shop in Henley selling clothing and antiques.

Town councillor David Eggleton, of Gainsborough Road, and Janet Middleton-Stewart, of Meadow Road, have taken over the former Boatique shop in Friday Street.

He will run Vintage Vogue selling antiques and collectables while she will run her womenswear business, the Willow Dress Agency.

The shop, which will be officially opened by Mayor Glen Lambert on Friday, has been split in half so the pair can run side-by-side until October next year when the lease runs out.

The premises was vacated earlier this month by Jules Campbell, who had owned the nautical-themed clothing and gift shop since April last year.

The shop was previously run by Gillian Nahum, who set it up in 2012. She continues to run boat hire and sales firm Henley Sales and Charter, from the office above the shop.

Mrs Middleton-Stewart said: “The lease is perfect for us because we are trying something out and seeing if we will want it to continue.

“I’ve always felt Henley needed something like this. Virtually all the clothing is pre-loved but there are some new things mixed in. I love feeling part of the town and talking to people in the shop.”

She last ran her shop, under the same name, in Market Place Mews two years ago. The business was previously in High Street, Wargrave.

Mrs Middleton-Stewart said: “When I went in to Market Place Mews David was also looking to go into the shop, which was when we first spoke about it.

“I was putting in some of his big bits of furniture and it went well. We decided that if there was a right place then there was an opening for it. We are very positive and very excited. I feel we are adding to the other shops in Friday Street.

“The big department stores are going because we now all buy online but I feel people are going to come back to smaller shops.”

Mr Eggleton, 60, ran the Barnyard bric-a-brac shop in Reading Road until 2003 when it burned down in a suspected arson attack.

In 2010 he took over a unit at the Lamb Arcade in Wallingford, a shopping centre dedicated to second-hand goods and antiques. He will continue to run this and his home clearance business as well as the new shop.

He said: “I love meeting and talking to the different people and customers. Everyone who has popped in so far has been really positive and wishing us luck.

“What we are doing is an example of what could be done to help people who want to start a business in Henley. We need more smaller units and more short-term leases. If people are able to open a business then other people will come to try it out.

“If it works for a year then you can look at getting a longer lease. Then you will end up filling more shops and there will be fewer empty units.”