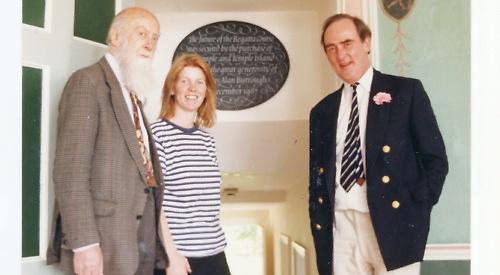 IT is one of the iconic landmarks on the Henley Royal Regatta course, but Temple Island could have looked very different if it wasn’t for the generosity of one Henley couple.

The island, which features Fawley Temple, was falling into disrepair in 1987 when the owners, the Mackenzie family of Fawley Court, were struggling to cope with its upkeep.

With the island being in the middle of the 2,112m regatta course, issues over its condition and ownership could have threatened the event itself.

Step in Alan and Rosie Burrough. Mr Burrough, who was a regatta steward, donated £515,000 to the regatta which allowed it to effectively buy and restore the island.

Three years later, the couple were honoured with a large plaque in the temple.

The Welsh slate carving, which has ornate letters and swirls to depict lapping waves, reads: “The future of the regatta course was secured by the purchase of the temple and Temple Island through the great generosity of Mr and Mrs Alan Burrough in December 1987.”

It was made by sculptor Lida Kindersley, who ran the Cardozo Kindersley Workshop in Cambridge with her late husband David.

She was commissioned by regatta chairman Peter Coni as the couple had already made a coloured glass sculpture commemorating the opening of the regatta headquarters by the Queen in 1986.

Mrs Kindersley says: “It’s lovely that they came back. When you get that sort of loyalty going it’s fantastic.”

The couple visited the island in April 1990 and made designs which were then approved by the regatta committee. The plaque took five months to create.

Mrs Kindersley says: “Normally the work itself will take two or three months but we had to go and see the island. We went by boat, which was jolly nice.

“We made sketches in pencil because we work only by hand, no machinery. It went to the committee and then we ordered the material, which took four weeks.

“We then shaped it, rubbed it, drew it out in pencil and Peter came here and gave the go-ahead. The idea of the flourishes was to give it a watery feel, to copy the water when you stick the blades in.”

The sculptors then went to affix the plaque above the stairs in the temple. “I’ve got a picture of David standing precariously on a step-ladder,” says Mrs Kindersley.

Mr Burrough was born in 1917 and attended St Paul’s School in London before studying at Jesus College, Cambridge.

He was called up for the Second World War in 1939 — the year he married Rosie Bruce — and served as an artillery observation officer in Egypt, where he was wounded three times in six months in 1942.

The last of these was the result of his tank being hit at point-blank range, decapitating the driver and irreparably damaging the lower part of Mr Burrough’s right leg.

While recovering in South Africa, he began sculling with a prosthetic limb. On his return to London in 1944 he started rowing again in a pair with his brother John, a pilot whose plane was lost in action soon afterwards.

Mr Burrough was later chairman of the family distillery and in 1970 was made a CBE for services to export.

He and his wife lived with their three adopted children in New Street, Henley.

He raced in the Ladies’ Challenge Plate as well as the Wyfold, Thames, Grand, Stewards’ and Silver Goblets Challenge Cups.

He also represented Cambridge in the Boat Race in 1937, 1938 and 1939, winning in the final year when he was president of the university boat club.

Mr Burrough was made a regatta steward in 1950 before joining the committee 10 years later and serving until 1985.

During regatta week he could often be seen ferrying guests between his house and the stewards’ enclosure in his slipper launch, Bamboozle.

Mr Burrough, who also enjoyed sailing, served as deputy president of the Oxfordshire branch of the British Red Cross in the Eighties.

He also owned the 1983 Grand National winner Corbiere, which was registered under his son Bryan’s name.

Major refurbishment was carried out in 1884 by the Mackenzie family, who had bought Fawley Court 30 years previously.

This included raising the ground to prevent flooding, changing the windows and adding a balcony, which was later removed, and a staircase.

A cottage was also built on the north side of the island.

By the late Eighties the future of the island was uncertain and the building was in disrepair. Mr and Mrs Burrough’s donation allowed the regatta to rent the island from the Mackenzie family on a 999-year lease.

Restoration work was carried out on the temple and grounds, which can now be booked for up to 40 guests to watch the racing at a cost of least £1,200 a day without the cost of food and boat hire.

The regatta pays rent of two decorated eggs, its own version of a “peppercorn”, each year. These are presented to the trustees on the Saturday of the regatta.

This tradition was started by Mr Coni in 1987 when he was chairman and since then all the eggs have been kept at regatta headquarters.

It was after the regatta took over responsibility for the island that the restoration of the temple interior began.

From 1988 to 1990 Fiona Allardyce reconstructed parts of the paintings on the walls that had been lost over the years to restore the original colour scheme.

Temple Island freemasonry lodge was founded in 1965 and celebrated its 50th anniversary in 2015 with a visit to the island after which it is named.

The rest of the island is a nature reserve, with the land being allowed to grow wild to accommodate nesting birds and animals.