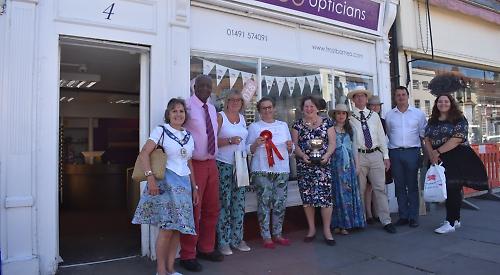 Frost Borneo in Hart Street was judged to be the best out of 19 businesses that entered the annual contest.

The competition theme was “200 years of rowing history” in honour of the bicentenary of Leander Club. Entrants had to combine rowing with elements of their own business in their displays as well as include one of 200 decorated hippos that were created to mark the milestone. The Frost Borneo display featured rowing blades, bottles of Pimm’s and straw hats as well as models of the Maui Jim polarized sunglasses which the business recently supplied to 99 coaches and athletes at Leander to protect them from glare on the water.

She said the business usually took part in the competition adding: “It feels amazing to win. A lot of effort goes into doing the window.” Staff were presented with a trophy by a judging panel that included representatives of the sponsors, South Oxfordshire District Council chairwoman Lorraine Hillier and Henley Mayor Glen Lambert and his wife Anna. The business also won £125 and a bottle of champagne.

The Kiln Café in Reading Road came second, the Henley Pet Shop in Bell Street was third and antiques store The Ferret in Friday Street was fourth. They received £100, £75 and £50 respectively and a bottle of champagne.

“Frost Borneo struck the right balance as it was restrained and classy and was very well done. I especially liked the bottle of Pimm’s wearing glasses!”

The competition was organised by Carolyn Molyneux, of Delegate conference services in Hart Street, and was sponsored by financial advisers Milton Gordon & Co, Head Partnership solicitors and Henley Town Council.