Highs and lows of opening day 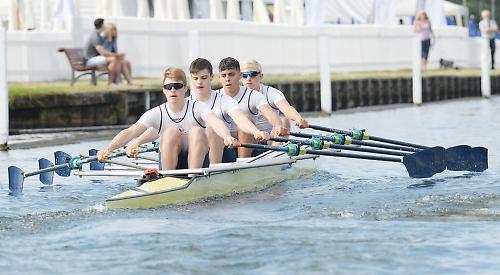 ROWERS from the Henley area met with mixed fortunes on the opening day of this year’s Henley Royal Regatta.

The event began on Wednesday with an early victory for Henley Rowing Club, whose B crew defeated The American School in London in the opening round of the Fawley Challenge Cup for junior men’s quads.

The boat, comprising Ed Roy, James Swinburn and Euan Turnell, from Henley, and Seth O’Connor, from Maidenhead, had a strong start and won by one-and-three-quarter lengths despite a last-minute push by their opponents.

James, 16, of Western Road, said: “We went off hard and got about three quarters of a length up but they started to push us back so we had to stay relaxed and focused. We were expecting windier conditions but they were the best we’ve had at Henley for a while. It’s nice to race in the morning because it’s cooler.”

Leander Club swiftly followed with two wins, firstly in the Thames Challenge Cup for men’s eights and then with its Star and Arrow development crew in the Fawley Challenge Cup.

Cox Sam Royston, 25, of Elizabeth Road, Henley, said: “We went out and got the job done. Our coach gave us a plan, we stuck to it and things went as we expected.

“We’re in it to win it but will take each day as it comes. We train here and this is our home water so these aren’t new surroundings and we’re feeling quite confident.” The Star and Arrow quad, all of whom attend The Henley College, defeated St Paul’s School by half-a-length despite catching a crab halfway along the course.

Miles Devereux, 17, who sat at bow, said: “We knew it was going to be a very hard race as St Paul’s are quick racers and we knew they would have a quick start.

“We just made sure we stayed with them and pushed mid-race quicker than we normally would. After catching a crab we recovered well but had to dig deep in the last kilometre and push on.”

However, a junior men’s eight from the Oratory School in Woodcote were knocked out in the opening round of the Princess Elizabeth Challenge Cup by Westminster School, who won by three-and-three-quarter lengths.

The boys’ boat was named after Jack D’Arcy Camilleri, 20, a former Oratory captain of boats and Henley Rowing Club member who was killed in a road accident in the Far East last summer.

Number six Josh Bisdee, 18, from Checkendon, said: “We had a decent race but it was always going to be tough against Westminster, who’ve been 20 seconds quicker than us all year.

“Our race plan was to set off better than we did but they went very fast off the start and blew us away quickly. We gave everything and couldn’t have done more. We’re a young crew and a lot of these boys will be back next year.

“Rowing at Oratory is growing and we are continually getting faster. This is our first year in this event in five years so we’re only going upwards.”

A men’s eight from Upper Thames Rowing Club were then defeated in the Thames Challenge Cup by Montclair Mounties Rowing Club, of New Jersey, who built on an early lead to win by two-and-three-quarter lengths.

Upper Thames coach Toby Mottram said: “We raced as well as we could considering we only had a short time to put this boat together and build it from the ground up. All clubs go through their cycles and after nine years of rowing I was asked to come back and coach in January.

“As a squad, the club is very strong and is yet to compete in a number of other events so we’re only at the start and can only get better from here.”

A crew of 15- and 16-year-olds from Shiplake College were defeated in the Temple Challenge Cup for students’ men’s eights by an older boat from Nottingham University, which won by two lengths.

Shiplake boarder Marcus Coulter, who sat at number seven, said: “It was just amazing to be here and the fact that we gave them a proper go was a great experience for everybody.

“We always knew we were underdogs – we’re 16 and they’re a uni crew, so just to race against them was nice. We’re still a young crew so we’ll definitely be in good shape to come back to the regatta.”