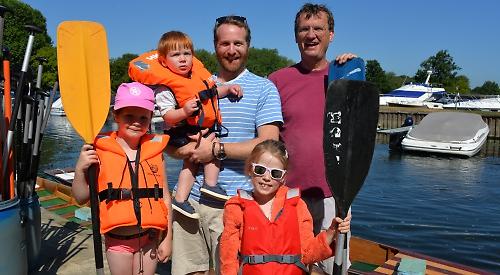 HUNDREDS of people took part in the Wargrave rag regatta on the River Thames in sweltering conditions on Saturday.

Many families were among those competing in the 90 races in dozens of categories, including dinghy, skiff and dongola.

There was also the Bull Enduro kayak race, where adults drink half a pint of beer at the Bull in High Street before paddling back down the course, and its junior equivalent, the Anne Reid Enduro, where the children drink lemonade.

The event, which is hosted by Wargrave Boating Club, was watched by dozens of people on both banks in temperatures that reached 30C.

Club chairman Carlton Barnard said there was a total of 80 crews and a record number of young competitors in many of the races, including the under-10s sit-on kayak, which featured three-abreast racing for the first time.

He said: “It went very well. There was some very close racing, especially in the skiffing and the finals of both the dongola races.

“In the Bull Enduro we had 17 adults, one of whom was 10 minutes behind everyone else! It’s always a fun event and the emphasis is on kids having fun and everyone taking part.” The results were as follows:

Traditional skiff (18 and over): Jan Vonka, Will Monté and Sara Beazley (cox)

Adult and child (nine and under) Canadian canoe: Alex and Henry Deacon

Bull Enduro (18 and over): Gordon Merritt and Becky Worthington

Anne Reid Enduro (10 and over): Oliver Deacon and Molly Hall

Sit-on kayak (adult and under- 10s): Hamish and Sophie Floyd

Sit-on kayak (16 and over): Lucie Daman and Will Denham