Children rise to the challenge 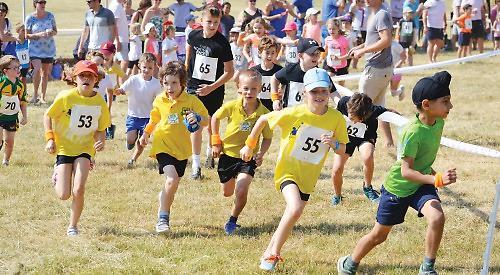 MORE than 130 children took part in a cross-country run and raised about £15,000 for charity.

About 40 teams of four- to 14-year-olds representing various schools participated in Saturday’s event when the temperatures were in the twenties.

The runners set off from the Henley Showground and ran a course through the Culden Faw estate, some accompanied by their parents.

They could run alternate 1km laps over either 8km, 12km or 20km but many children ended up running further, with some teams clocking up 40km.

The day was organised by the Children’s Challenge, a not-for-profit organisation that arranges events and was established last year. Entry was free but each runner had to raise at least £25 for a charity of their choice. All participants received a medal.

Organiser Stephen Lamacraft, 41, of Northfield Avenue, Shiplake, said: “The kids had a really great time and you could see the joy and fun in their faces. When you have got four-year-olds running a 1km lap on their own it’s brilliant.

“It’s teaching them about having grit and doing things for others. It’s so rewarding to see kids getting out and about and working hard. There was determination in their faces.

“All the parents were saying, ‘we were so surprised they were able to run so far’.

“The children probably went through a range of emotions from excitement and determination to jubilation and celebration.

“I’m just so proud of them and what they achieved raising that amount of money for charity.” Mr Lamacraft, a father of four who works as a fund manager, said he received lots of positive feedback from both parents and children.

Three of his children took part. Alexander, eight, and Lucy, six, both ran 20km with their friends and four-year-old William’s team completed 12km.

Mr Lamacraft said: “I’m trying to organise events that are worthy of sponsorship so parents don’t feel bad asking for it. Some of the schools actively helped me promote this event. Shiplake primary was pretty immense with 70 to 80 kids taking part.”

The beneficiaries included the Chiltern Centre for disabled children in Henley and the Me2 Club, which enables children and young people with additional needs and disabilities to attend mainstream activities.

The runners included Tom Bonser, 11, who lives with his parents Oliver and Henrietta, and brother Will, 13, and sister Jemima, 11, in Heathfield Avenue, Binfield Heath.

He was in a team called the Hacker Harriers, which raised £1,686.25 for various charities.

It is named after Robbie Keville who was six when he lost his mother Kate to breast cancer.

Robbie decided then to become a doctor but at the age of eight he was diagnosed with a malignant brain tumour and died  in February 2016, aged 10. Tom’s family met Robbie’s father Mark earlier this year.

Mrs Bonser said: “Mark explained a bit more about the charity and when we left Tom said ‘I want to do something for Mark’ because he’s the most lovely man and he lost his wife and his son.

“Robbie knew he was dying but he wanted to set up a charity to help other children like himself.

“The Children’s Challenge came up and it was ideal. You’re in a team which is great and it’s not a competition and everyone can choose their own charity.

“It’s allowing children to raise money for good causes, which is a really positive thing.

“I thought it was very well organised. It was very family orientated and I hope they do lots of these and open it up to older children as well.”

Tom, who ran about 20km in his team, said: “Mark inspired me to help and when I heard about this run I thought it was a good idea.

“I was really happy doing it for robbiesrally. Mum and dad were saying ‘run well’ and I knew I had when I crossed the finish line. I was really pleased with myself. My mum and dad were cheering me on.” Team Stars, which comprised Shiplake primary pupills Romy Brant, Stanley Upsher, Leah Brooks and Ovia Chamberlain, were down to run 8km but ended up running 23km in total.

Romy, of Albert Road, Henley, ran for Pets As Therapy and had raised more than £400 before the event.

Her mother Aspen Weatherburn said: “I am very proud of Romy and love the charity she has chosen. Thank you so much to all our family and friends for sponsoring Romy.”