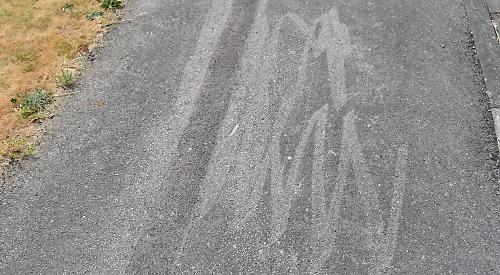 A MAN has complained that pavements near his home in Wargrave are still scruffy and streaked — a year after they were dug up to install new broadband cables.

He also says that Wokingham Borough Council had promised to resolve the issue and then reneged.

Mr Meadowcroft, of Watermans Way, was unhappy with work to clean the pavements carried out in November following the installation of the ultrafast broadband cables.

Machines used to dig the trenches in which the cables were installed expelled a sticky substance which needed to be washed away.

Virgin Media said initially that the deposit would be washed away by the rain before agreeing to clean the pavements.

A contractor carried out the work in November using a pressure washer but Mr Meadowcroft complained to both the company and the council about the standard of the work.

He said the pressure washer had left streaks on the tarmac and the company should return to do the whole pavement so it matched. He said the council agreed to do the work again but later said it was happy with the condition of the pavements.

Mr Meadowcroft has written several times to Jason Archer, the council’s street works officer, and also complained to new borough councillor Graham Howe, who lives in Wargrave, to demand the work is redone.

He said: “No money is needed, nothing more than coming with a high pressure hose and doing the whole pavement. It was regarded by the borough council as ‘needing remediation’, which was promised before Christmas. Then it became after Christmas, then the spring.

“Now Wokingham says that having been in touch with Virgin again they think it’s all right.”

Mr Meadowcroft said work was carried out on underground water pipes in Watermans Way without any similar damage to the pavement.

He said: “I have no objection to digging up pavements and putting cables down but it has got to be finished in a sensible way. I don’t want the council to think I want it to be perfect, only returned to the previous state.

“Virgin came to a council meeting and said they were conscious of brand reputation. By doing this I don’t think they have done their reputation any good.

“How can anyone have confidence in the product when laying the cables has been done in such a tatty manner?”

Councillor Anthony Pollock, executive member for transport and highways, said: “We have twice requested Virgin Media return to clean their area of work in Wargrave, once for the trenches and secondly for the reinstated pavement and they have complied with our requests.

“We are now content that their work has been undertaken to an appropriate standard and that it has therefore now been completed.”

A Virgin Media spokesman said: “We worked closely with Wokingham highways throughout the build process in Wargrave.

“They are satisfied with the condition of pathways after the completion of our reinstatement works and, as a result, we have no plans to return to the area.”

Virgin carried out the work as part of its Cable My Street initiative, which offers householders and businesses broadband speeds of up to 200 megabytes per second. The work was carried out in several streets.