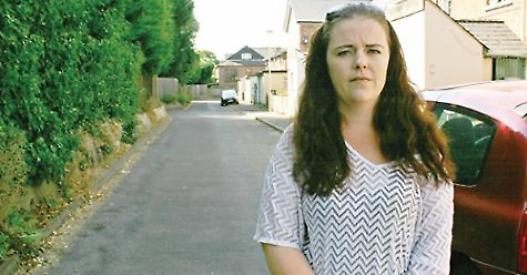 A DELIVERY van driver ran over and killed a family’s cat in front of two children as she slept in the road.

Sue Guy-Spratt says Bonnie, her tortoiseshell tabby, refused to move out of the man’s way so he just drove over her.

But instead of apologising, the man said, “I just thought it was a bit of roadkill”.

Ms Guy-Spratt, 33, has since received an apology from Tesco, for whom the driver was delivering goods in Railway Cottages, a cul-de-sac off Reading Road in Goring.

The incident happened at about 7.30pm on June 28 but was not seen by Ms Guy-Spratt who was in her back garden having a barbecue with her partner, children Leo, 12, Jasmine, 11, and Willow, three, and some friends.

However, it was witnessed by her neighbour Nikki Allen’s daughter Lyla, 10, and a woman who was dropping Lyla home after a playdate with her daughter, who also saw it.

The women and two girls knocked on her door while trying to find out who 18-year-old Bonnie belonged to.

Ms Guy-Spratt said: “Nikki asked if I owned a cat and I said I had a dark one so she replied, ‘okay, I don’t think it’s yours’.

“I breathed a sigh of relief but then I added she was a tortoiseshell and the colour drained from her face. She then explained what had happened and my heart broke.”

Mrs Allen told her that the driver had stopped his van in front of Bonnie and then got out of his cab and attempted to shoo her off the road.

Ms Guy-Spratt said: “He’d approached her as she was lying down in this boiling hot weather and she wouldn’t have moved because she’d have thought he was going to stroke her.

“I’ve seen several neighbours get very frustrated with Bonnie in the past because she’s pretty stubborn but they would just pick her up and plonk her back into my front garden.”

When the cat refused to budge, the driver got back in the van and drove straight over her, causing severe head injuries.

Bonnie suffered a violent fit before she died beneath a parked car while the driver continued his delivery.

Ms Guy-Spratt said she asked her partner to go and identify Bonnie. “I just couldn’t cope,” she said. “I stood by the door and watched him walk over, then he looked back and said it was Bonnie.

“I burst into tears and he came back to comfort me. He was pretty upset himself as she had horrific head injuries.”

Her partner went to remonstrate with the driver who was unloading shopping at a neighbour’s house but was met with indifference.

Ms Guy-Spratt said: “He told him the least he could do was come over and apologise.

“By then I was back in the kitchen in pieces and [the driver] walked in with this big smirk on his face, shrugged and said, ‘I just thought it was a bit of roadkill’.

“I just screamed at him to get out of my house and called him a horrible little man.

“He must have watched her fitting while he unpacked the shopping and did absolutely nothing.

“It’s such an utterly vile thing to do and I can’t understand how anyone could be so dismissive of a living being, especially with children watching.”

Ms Guy-Spratt, who had owned Bonnie for 15 years since her former partner bought her from the Oxfordshire Animal Sanctuary at Stadhampton, reported the incident to the police but they said they could not help.

She also contacted the RSPCA, which has said it will investigate.

She said Tesco had apologised and offered her £250 for a new pet. The company also said the driver was being retrained and it would amend its driver training programme to include dealing with animals.

Ms Guy-Spratt said: “The whole week was horrific because I had to relive the incident so many times explaining what happened.

“Tesco took it very seriously and have handled it as well as they could. It’s not a complaint against them as a company, just this one driver.

“I’m not going to let it go because it’s animal cruelty as far as I’m concerned.

“I posted about it on social media and there have been messages of sympathy and anger from other people in the village. Bonnie was a very old and stubborn cat but very much a part of the family. She was my pet and Leo and Jasmine have grown up with her.

“They don’t like to talk about it but I know it has affected them. I’m just glad they didn’t see what happened.”

Mrs Allen said: “Lyla came running into the house in tears to get me and told me what she’d seen.

“I couldn’t get my head around it at first until her friend’s mum explained. Lyla was incredibly upset because she is a real animal lover and was crying for the rest of the night.”

A Tesco spokesman said: “We are investigating the incident and will take appropriate action.

“We have spoken to the owner to express our sorrow for her loss and to apologise for the distress caused.”