Grace Jones has the whole crowd dancing at festival 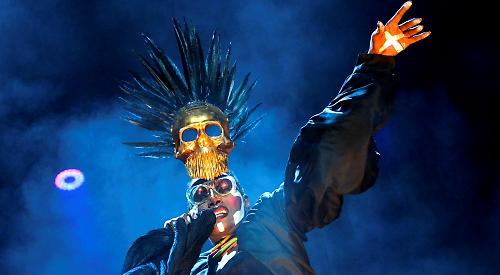 GRACE Jones wowed the crowd in a series of glittering outfits and head dresses on the second night of the Henley Festival.

The Jamaican-American singer, actress and supermodel kept the audience waiting for an hour before arriving at the side of the “floating stage” in the back of a golf buggy.

She opened with Nightclubbing dressed in a black corset, billowing black cape, gold skull mask with black feathers and white patterned body paint and was accompanied by a six-piece band.

Eight costume changes followed with the singer donning a series of elaborate wigs and hats in a set lasting about 90 minutes.

She told the crowd: “I’m sorry, I couldn’t come out until the sent went down. I’m a self-proclaimed vampire.

Her set also included This is Life, Private Life and Jones played the cymbals when she performed Leatherette.

She also played My Jamaican Guy, Amazing Grace and Love is a Drug and drank two glasses of red wine on stage during her performance, brought to her by a stage technician.

She quipped that she normally performed naked apart from body paint and underwear, but had donned a black corset to fit in with the Henley Festival black tie dress code.

She also commented on the current heatwave saying: “I was in Jamaica, wishing I was here. I think you’re really missing the rain now!”

Towards the end of her set, with the crowd on their feet and dancing is the aisles, she sat atop a man’s shoulders and did a circuit of the lawn in front of the stage.

She greeted fans who rushed to get a picture of her on their phones.

She said: “You’re the best. I thought I was coming here to play to a really boring bunch of people in ties and I’m going to have to jump on their tables and drink their champagne! This is a good surprise.”

The festival fireworks were set off before she finished and she played Slave to the Rhythm as an encore while spinning a hula hoop around her waist for the entire song.

She performed the feat at the Queen’s Diamond Jubilee concert in 2012 and told the festival crowd: “Since I did this for the Queen I’ve not been able to stop!”

Before she left the stage she thanked the crowd and told them: "Pray for Trump”.