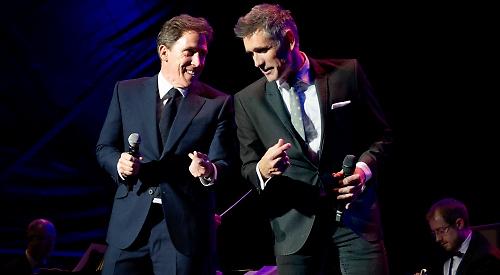 Jazz musician Curtis Stigers brought a touch of class to the Henley Festival as he performed a Frank Sinatra medley on Saturday (14).

The American singer and saxophonist played alongside the Ronnie Scott’s Big Band on the festival’s “floating” stage and even brought out comedian Rob Brydon to sing with him.

Thousands of people watched the show on a warm evening, many removing their dinner jackets due to the heat.

After a brief delay as audience members filed in to the enclosure, the festival’s artistic director Stewart Collins introduced the act to the stage by suggesting that making lots of noise would ensure any stragglers quickly made their way to their seats.

After the band played an instrumental number, Stigers emerged and complimented the crowd on their attire.

He joked: “I may not be the first but I’m certainly the drunkest person to say you look fabulous”, before pointing out one man who was wearing a top hat in the crowd.

He added: “I usually like to try and look better than the audience but it’s not worth it tonight!”

Stigers sang some of Sinatra’s best known hits including “One For My Baby”, “Don’t Worry ‘bout Me” and “I’ve Got You Under My Skin”.

He also performed some of his own hits, including “Hooray for Love” and “I Wonder Why”, as well as playing the saxophone.

He did a cover of Bob Dylan’s “I’ll Be Your Baby Tonight”.

The crowd cheered as Brydon unexpectedly made his way to the stage and joined Stigers for several duets.

The comedian said: “How nice for you to see some of this country’s inner-city deprivation.

“Some of these people are down to their last Porsche!”

Despite initially refusing to do any of his trademark impressions, Brydon was jokingly reminded of his “contractual obligations” by Stigers, complete with a large paper document.

He proceeded to sing a verse of “Fly Me To The Moon” in the style of actor Michael Caine, playwright Alan Bennett and comedian Ronnie Corbett.

Brydon later emerged for a rendition of “The Lady is a Tramp” as the set finished with a flourish.

On Sunday (15), hundreds of children and their parents attended the festival’s family day.

There were performances from 10.30am to 2pm, with comedy, music and arts and crafts.

Henley Youth Choir sang at the festival’s jazz tent, while Acoustic Magoos arranged for young musicians to play at The Bedouin and Wargrave Community Choir appeared on the floating stage.

The family day was introduced to the festival in 2015 and sees more child-centred performances held ahead of the main event.

For a full round-up of this year’s festival, see this week’s Henley Standard.