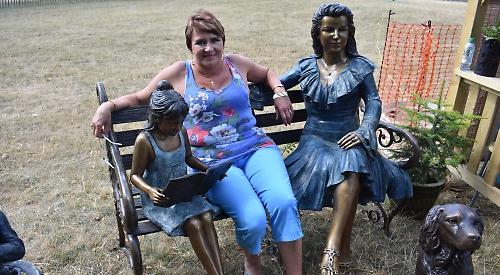 HUNDREDS of people enjoyed the sunshine at a new homes and garden show at Stonor Park.

Dozens of stallholders selling arts and crafts, furniture and plants set up around the grounds, while there was also live entertainment and food and drink on offer.

Among those to attend was food writer and television presenter Mary Berry, who lives in Henley, while many others visited with their families to browse the goods on offer or enjoy the temperatures of almost 30C.

There were talks and live demonstrations including woodwork, composting and even caring for bees, while singer Hollie Blue also performed.

There were more than 130 exhibitors over the three days and queues of people could be seen before the venue opened at 10am.

Organiser Matt Upson said he was pleased with the exhibitors and venues but thinks the hot weather may have put some people off visiting.

He said: “It was too hot for a garden show, so many people booked tickets and didn’t turn up because of it.”

Mr Upson added that next year’s show was likely to be held in April or May. He added: “We are looking forward to next year and we are going to bring it more in to the gardening season so there will be lots more plants.”