Curtis and friend did it his way 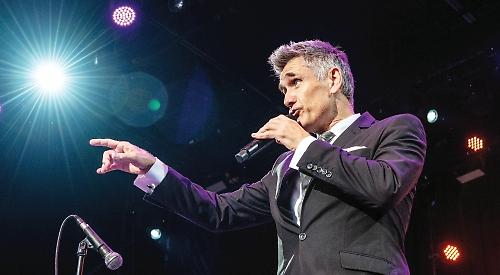 WITH its patrons resplendent in immaculately pressed dinner jackets and glamorous ball gowns, the Henley Festival has always had the air of a Sixties jazz hall.

Perhaps, then, it’s only fitting that Curtis Stigers should bring a touch of class to the proceedings with a tribute to Frank Sinatra.

Born in Idaho rather than the gritty streets of Hoboken, and with not quite the off-beat charm of Ol’ Blue Eyes, Stigers nonetheless boasts a voice anyone would be proud of. And to top it off, he plays the saxophone too.

But what is a big band act without the band? Stigers was joined on stage by the Ronnie Scott’s Jazz Orchestra, which comprises more than a dozen saxophonoists, trumpeters, drummers and pianists and even boasts a Queen’s Counsel among their number.

Conductor Pete Long mashalled them superbly, and also drew laughs from the crowd as he introduced each member with a humorous description.

They included a band member known only as “The Panther” and a trombonist who is “one of only two people from Essex who doesn’t have an orange face”.

The band warmed up the audience with a couple of instrumental numbers before Stigers emerged, fashionably late, and jumped in with the classics, including Fly Me to the Moon. Effortlessly charming, Stigers bookended his songs with compliments to the audience and stories from his career.

And it wasn’t just Sinatra’s back catalogue, the 52-year-old also performed some of his own songs, compositions by Cole Porter and even Bob Dylan’s Blowin’ in the Wind, sung of course in a big band style.

What more could the audience ask for? How about a duet with one of the country’s top comedians? Enter Rob Brydon, proving that the correlation between Welsh blood and singing prowess is still a strong one.

After a few quips about Henley’s reputation as a haven for the posh, Brydon treated the crowd to impressions of actor Michael Caine, playwright Alan Bennett and comedian Ronnie Corbett, before launching in to a couple of duets.

The excellent performance was met with a fittingly spectacular end — the nightly fireworks display going off perfectly in sync with the final note. As eyes turned towards the sky, Stigers and the Ronnie Scott’s band could take their leave, a job well done.