Legion chairman on pilgrimage to Ypres 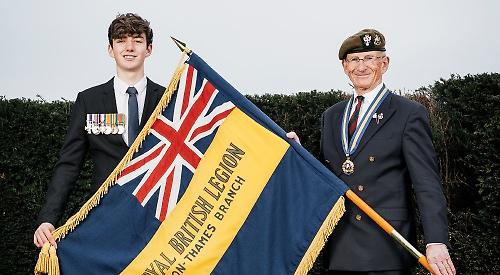 A MAN from Maidensgrove and his grandson will make a pilgrimage to Ypres to commemorate the 100th anniversary of the end of the First World War.

John Green, chairman of the Henley and Peppard branch of the Royal British Legion, and Edward Bloomer will travel to the Belgian battleground next month for a parade and ceremony.

They will be among more than 2,000 legion members and dignitaries from around the world to make the journey, known as the Great Pilgrimage, from August 5 to 9.

This year marks 90 years since the first Great Pilgrimage in 1928, when 11,000 war veterans and widows visited battlefields in France and Belgium. The event will culminate with a march to the Menin Gate war memorial where Edward, a 17-year-old student at The Henley College, who lives in Stoke Row, will lay a wreath on behalf of the town.

He will also wear war medals awarded to his great grandfather, and Mr Green’s father, Captain William Leslie Green, including the Military Cross.

Mr Green, 82, who will be standard-bearer for the pilgrimage, said: “This is a unique opportunity for the legion to come together and bear our standards along the same route in Ypres taken 90 years earlier.”

He added: “The branch looks forward to proudly representing Henley at the event.”