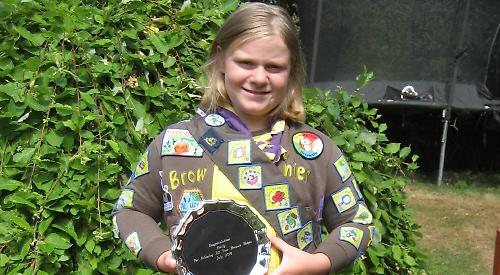 A BROWNIE from Wargrave was presented with a special commemorative plate after collecting more than 50 badges.

The diamond-shaped badges are sown on to her brownies hoodie and sash by mother Sonia and they now almost entirely cover it.

Emily, who goes to the Robert Piggott Junior School, picked up her trophy at a meeting of the troop earlier this month, one of her final meetings before she graduates on to guides in September.

The silver plate reads: “Congratulations Emily for achieving all your brownie badges.”

Emily lives in the village with her parents Sonia and Andrew and older sisters Charlotte, 14, and Annabel, 12.

She joined the Second Wargrave Brownies when her mother was one of the leaders, although she has now left the role.

There are dozens of badges that brownies can work towards, most of which are split into either the adventure or interest categories. To earn a badge, the brownie must complete a set of tasks, some compulsory and some optional, and learn specific skills.

Some of the tasks will also involve working with other brownies who are also attempting the same badge. Once the brownie has finished all the tasks they will be tested, usually by a leader or more experienced brownie.

Mrs Norman said: “She has worked extremely hard to achieve all these badges. This is something that very few Brownies achieve. She loves being there with her friends and she loves all the activities.

“Emily likes being outside and being in the woods and had a great time on the district camp last year at Paccar where she slept in a bell tent. She also had great fun on the brownie pack holiday when they went to Paxmead. They went canoeing and had a wonderful time.”

In 2016, Annabel, now a guide, also received a special award for completing 71 badges. She was presented with a similar silver salver to mark her achievement, which took her just three years.

Charlotte is also a ranger in Wargrave and recently achieved her Baden-Powell award.

Emily says she was inspired to complete all her badges by her sister. She spent a lot of time with the guides leaders being tested on her badges, as well as young leaders Saiorse Malone and Aimee Mortimer.

Her favourite badge to complete was “environment”, which challenges brownies to take up eco-friendly hobbies such as saving water or recycling plastic.

Emily said: “I learned so many useful things while I was doing it and because it is so important that we know about the environment so we can help it.”

Wargrave has four troops for girls aged five to 18 in the village: rainbows, brownies, guides and rangers. The rangers, which are for 14- to 18-year-olds, were previously known as the senior section before being renamed last year as part of a move by Girlguiding UK.

They hold regular events including bingo nights at care homes, picnics and trips away.