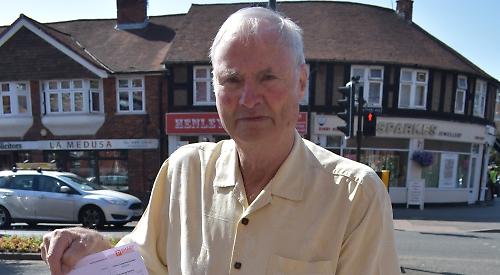 A MAN who took his wife to Townlands Memorial Hospital in Henley after she fell and broke her shoulder was given a parking fine despite registering for free parking twice.

Ian Reynolds was sent a £60 fine in the post more than a week after taking his wife Ailsa for an X-ray at the hospital last month.

Mrs Reynolds had fallen at home 10 days previously and was referred to the hospital, where scans revealed the break.

The couple are among dozens of patients who have complained to the Henley Standard about being issued with unfair fines of up to £160, with many having been sent letters threatening them with court action if they refuse to pay.

This has led to calls for NHS Property Services, which owns the hospital, to sack Smart Parking, the enforcement company which has already lost its contract for the neighbouring GP surgeries following dozens of complaints.

He said: “I’m pretty computer literate and I know what I’m doing. You have to put in your name and details on the system but it doesn’t give you confirmation.”

Mr Reynolds says they were at the hospital for about half an hour and blames the fine on the computer system for failing to register his details correctly.

He said: “The problem must be with the interface with the log-in screen on the reception desk. It’s a total shambles. Just get this system switched off. What is wrong with a simple ticket for the windscreen?”

Mr Reynolds has appealed the fine but is yet to hear back.

Mike Pooley, 82, from Rotherfield Greys, was fined after visiting the hospital in April to have his pacemaker checked. He spent 21 minutes there and says he entered his details correctly. He appealed the fine but it was rejected by Smart Parking.

He said: “I was very careful to put in my correct car number and to press ‘acknowledge’. My first appeal was refused and I got a letter which I think is generated for most people.”

Mr Pooley wrote to Smart Parking asking what he did wrong and then took his case to the independent Parking on Private Land appeals service, which told him that the company was not contesting the appeal and his fine was cancelled.

He added: “There are a lot of elderly people who go to Townlands and they get scared and pay it. I did everything right.”

Roger Young was issued with a ticket while visiting Townlands for a physiotherapy appointment.

Living in Oxford, he usually attends the John Radcliffe Hospital but was persuaded to go to Townlands as it would be less busy.

He entered his details at reception and spent 35 minutes at the site but was sent a fine in the post.

Mr Young said: “I appealed, sending proof of my appointment but received a rejection, not because I did not have a valid reason to be there but because they did not receive my number plate from the hospital.

“Maybe I filled it in incorrectly or did not click a button, I don’t know. Ill people who are a bit stressed tend to make mistakes. However, the car park is for patients and I was one so still trying to fine me is wrong.”

Mr Young’s fine was cancelled after he appealed to POPLA.

Laurence and Anne Reavill were fined after parking at the hospital while he attended a hearing aid appointment.

In April, the Henley Standard reported that the couple from Nuns Acre, Goring, had spent about 45 minutes there and entered their car’s details in the keypad at reception but probably made an error which led to the fine.

They appealed to Smart Parking but were turned down and later appealed again to POPLA.

Mrs Reavill now says that despite being told by Smart Parking that the fine would be cancelled, she received a letter from debt collectors last month warning her that she still owed £160. She says she does not intend to pay the fine.

Mrs Reavill said: “I don’t understand how the hospital can justify keeping this company on.”