Swimmers cool off in Thames at record-breaking challenge 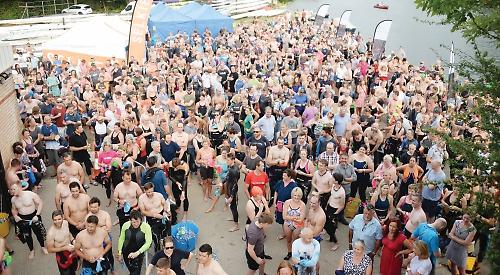 A RECORD number of swimmers flocked to Henley for the town’s fifth annual Club to Pub challenge.

The event, which took place last Saturday evening, attracted 626 contenders and all bar one successfully completed the 1.5km open water course on the River Thames. A further 128 signed up but didn’t turn up on the day.

Swimmers set off in waves from Henley Rowing Club in Wargrave Road and proceeded 400m upstream towards Marsh Lock before turning around and making for the finish at the Angel on the Bridge pub in Thames Side.

First over the line was Antonio Almaraz Serrano, of Reading Swimming Club, who finished in a time of 18 minutes and 35 seconds, followed by his clubmates Joel Winter and Shawn Morgan. Melanie Gibson, of North London, was the first woman to finish in 19 minutes and 47 seconds.

The winning man and woman in the traditional class, in which entrants wore ordinary swimming costumes instead of wetsuits, were Elizabeth Tarr, of Teddington, who came 14th, and Sam Wilton, 24, of Montpelier Drive in Emmer Green, who placed 20th in 21 minutes and 10 seconds.

Mr Wilton, who was swimming in open water for the first time, said: “I’m usually a pool swimmer and all I would say is that the river is a lot colder! I feel it was pretty good for the first time and I would love to do it again.”

The winner in the women’s masters (45 to 54) class was Katie Stanley, who came 23rd, while the first man over 54 was Phil Buck, of Hertfordshire, who came 40th. Jackie Blastland, who came 72nd, was the first woman over 54.

Everyone who finished was presented with a bottle of Two Bells beer made at Brakspear’s brewery in Bell Street and a medal with a built-in bottle opener. The company, which sponsors the race, named it so because the swimmers aim to finish between the 7pm and 8pm chimes of St Mary’s church in Hart Street.

Finishers were greeted in the pub’s beer garden by Henley Mayor Glen Lambert, who shook their hands and posed for photographs. They then met their friends and family and enjoyed a barbecue on the waterfront.

Several members of the Henley Open Water Swimming Club took part including Phil Cater, who was the first member over the line in 22 minutes and five seconds and 38th to finish overall, followed by Cerian Mellor, 41, of Albert Road, who was taking part for the second time.

She said: “It was hard work and is a bit of a battle at the beginning but it was great fun and the atmosphere is fantastic. I’ve just come back from swimming in the Arctic Circle but it’s not as different as you might think as the temperatures out there were about 22C.

“However, it’s great to be back in Henley. You just can’t beat it although I must train harder for next year!”

They were training to take part in the 14km Bridge to Bridge Thames Marathon from Henley to Marlow, which takes place on August 5 and is run by Henley Swim, organisers of the Club to Pub.

Mrs Reineke, of Berkshire Road, said: “It was good fun as it always is though I accidentally entered myself into the performance wave so I really felt like I had to mission it. I don’t think I’ve ever swum so fast in my life but it will be good preparation for next month.”

Other participants included Catherine Drummond, 38, of Haywards Close in Henley, who said: “It’s such a nice thing to do of an evening. There’s an incredible vibe at the start and the end.”

Steve Tassell, 41, of Brocks Way in Shiplake, had done it twice before and set a new personal best of 25 minutes and 44 seconds, 15 seconds faster than previously.

He said: “It was exhausting but very pleasurable. It’s lovely to jump into the cool river at the end of such a hot day — I felt as though I sizzled as I plunged in!

“It’s a brilliant swim in a beautiful location and you certainly can’t complain about being handed a lovely cold beer at the end.”

Andy Irving, 39, of Checkendon, who was taking part for the second time, said: “The water was lot colder than in previous weeks but I still had a lot of fun. I swim in the river from Marsh Lock to Wargrave most mornings so I’m very used to it.

“Swimming was my life from the age of eight to 16. Events like this are a great motivation for people to take up swimming again and part of what makes Henley such an active and healthy place.”

Martin Pennock, 56, of Wargrave, said: “I’ve done the Henley Classic swim before but this was my first go at the Club to Pub and I really enjoyed it. There were lots of boats on the water so it was quite choppy.”

Tim Spriggs, Tristan Stubbs and Anthony Campbell, who play for Henley Rugby Club’s veterans squad, took part for the first time and plan to compete annually. Mr Stubbs, 38, said: “I’m just pleased that I finished, didn’t drown, didn’t swallow a single gulp of water and only got elbowed in the face once! It was great fun.”

Harry Penrose, 26, of St Mark’s Road in Henley, took part for the first time with his friend Dan Scott, also 26. He said: “There was quite a lot of reeds poking up just below the surface so it’s harder than it looks but it was lovely on a hot day like this.”

Mark Errington, 51, of Shiplake, said: “I love it because it’s encouraging sport in the area and is very well run by a great bunch of people.

“Everybody is so supportive regardless of your fitness level and anyone who’s thinking of taking part should just go for it.”

Entrants came from across the South East with most coming from towns and villages along the Thames in Oxfordshire, Berkshire and Surrey as well as central London.