Patient ‘told off’ for visiting hospital after hours 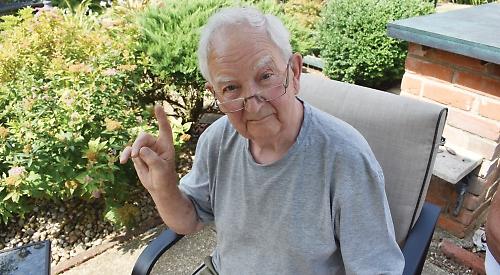 A MAN wants Townlands Memorial Hospital in Henley to stay open 24 hours a day after he was rebuked by staff for visiting after closing time, writes Jamie Presland.

Barry Laugher, of Baskerville Road, Sonning Common, went to the hospital off York Road earlier this month after his finger was infected by a large splinter.

He arrived at about 9.30pm, an hour-and-a-half after the hospital usually closes to patients.

Mr Laugher, 84, spoke to staff on the intercom, who he says told him off for visiting so late before finally admitting him for treatment at the minor injuries unit.

He says the ordeal was “very unpleasant” and while he thanked staff for treating his injuries he was upset with the way he was spoken to.

Mr Laugher said: “I had a poisoned finger from a half-inch splinter. It was twice the size of normal. I realised Townlands was shut after thumping on the door. I saw there were speakers and I told the nurse I felt ill and groggy.

“The nurse gave me the third degree. She finally let me in with a great deal of finger wagging and saying it was a one-off. It was very unpleasant.”

Mr Laugher says he also had a dispute with staff at the hospital earlier this year after injuring his arm gardening.

He visited Sonning Common Health Centre and was told to go to the Royal Berkshire Hospital in Reading for an X-ray but decided to visit Townlands instead as it was easier to travel to. He rang the hospital and arranged an X-ray but was told on his arrival that they weren’t expecting him.

Mr Laugher said: “I rang and spoke to a chap who was very reluctant to have me down. I went there at 2pm and spoke to the same man who denied that I’d been in touch or that he had told me to come down. They reluctantly gave me an X-ray and the person who did that was extremely pleasant.”

Mr Laugher says both the experiences have put him off visiting the hospital, even though he was pleased with the treatment he received for his injuries. He has called for the hospital to stay open overnight in case anyone needs emergency treatment.

A spokeswoman for Oxford Health said: “We are thankful that Mr Laugher was seen and that his injury was attended to even if it was after the closing time of the minor injuries unit.

“However, we are sorry that there was an apparent aversion to seeing him in the first instance. We are keen to ensure that our services at Townlands are responsive and supportive of the community and we have raised this with all reception staff in Townlands as a useful reminder for all.”