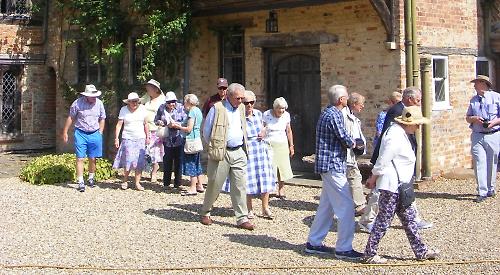 MEMBERS visited manor house Dorney Court for their July meeting. The Grade I listed home has belonged to the same family, the Palmers, for almost 500 years and much of it dates back to the Tudor and Norman periods.

The property was bought by Sir William Garrard, Lord Mayor of London, in 1537, whose daughter married James Palmer.

The estate was originally agricultural, with the great hall repurposed from a large barn.

During the Civil War, the family supported the Royalists and moved to Powys in Wales.

While they were away, Dorney Court was stripped of its contents, although the house itself remained and one piece of intricate embroideryhas subsequently been returned.

The first pineapple to be grown in England was at cultivated at Dorney Court and this is commemorated at various places in the house, including a 21st century table made from trees grown on the estate.

The upstairs sleeping accommodation probably began as a large dormitory and was later partitioned into separate bedrooms. These maintain many period furnishings and have been featured in film and television drama productions. By the 20th century, the house was in need of restoration with the owners Peregrine and Jill Palmer working on the roof in the Eighties.

Work to renovate the portraits and gardens is ongoing.

The visit ended with afternoon refreshments in the Dorney Court kitchen garden.

The society’s next meeting will take place on Tuesday, September 11, when Joe and Joy Haynes will talk about the history of Wargrave Theatre Workshop. On Tuesday, October 9, local historian and author Paul Lacey will speak on the history of Smith’s Coaches of Reading.

Meetings take place at the Old Pavilion in the recreation ground, off Recreation Road, starting at 8pm.

For more information, call Peter Delaney on  0118 940 3121 or visit www.wargravehistory.org.uk