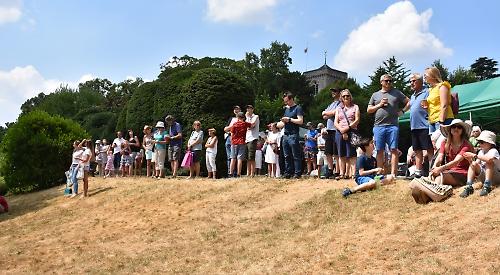 A FLYPAST from a Second World War Spitfire was the star attraction at this year’s Caversham Church Fete.

The iconic aircraft made three passes over the event held at Caversham Court Gardens.

Hundreds of visitors crowded on a hill and the banks of the River Thames and looked to the sky as the Spitfire made its first appearance soon after 2pm.

The mark 26 model, which was used for reconnaissance and was not armed, was flown by Squadron Leader Mark “Disco” Discombe ASC.

In 2016, Sq Ldr Discombe was awarded the Air Force Cross after safely landing a Hurricane when it suffered an oil leak while conducting a flypast over Cadwell Park racing circuit.

The Spitfire was provided by the RAF Battle of Britain Memorial Flight, which operates from RAF Coningsby in Lincolnshire, and also visited other events in the region to mark the centenary of the RAF.

Dozens of families attended the annual fete at the riverside beauty spot off Church Road, which is organised by the parish churches of St Peter and St John in Caversham and St Margaret’s in Mapledurham.

They were making the most of the good weather, with some bringing along deckchairs to sit on the bank and others sheltering under parasols.

There was music provided by the Tadley Band, a traditional brass band which was formed more than 140 years ago, as well as performances by children from the Joanna Wright School of Dance in Caversham and entertainer Fred in the Shed.

There were fairground games including hoopla and hook-a-duck, tombolas and stalls selling food and drink, books and arts and crafts run by groups including the Fifth Caversham Brownies.

Guests could also treat themselves to afternoon tea and ice cream, while there was a Pimm’s tent overlooking the river. The event was rounded off with the traditional grand draw raffle, with prizes including a £150 John Lewis voucher, hand-made quilt and a portable digital radio. It is expected to make about £11,000, which will go towards the churches’ upkeep and charitable activities.

Churchwarden Steve Jenkins, who sits on the organising committee, said: “I’d say we probably had as many people as last year and takings seemed to be about the same.

“We had people coming from as far as Maidenhead and the weather was lovely. We even had two members of the clergy, rector Mike Smith and Penny Cuthbert, attempting to save penalties! It was a wonderful day.”