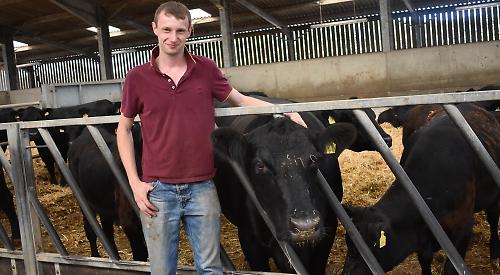 A YOUNG farmer saved pedigree cattle from a rapidly spreading fire which torched six hectares of grassland in Kidmore End.

Nathan Moore, who lives in Sonning Common, moved the herd of about 50 animals to safety from the field at Vines Farm, off Chalkhouse Green Road.

He guided the Aberdeen Angus cattle, which had a value of about £100,000, from the blazing field by calling them and tempting them with a bucket of food.

The fire started due to a bonfire at a neighbouring property which got out of control at about 3pm on Sunday.

Mr Moore, 20, is from Northern Ireland but is spending a year working at the farm as part of his agriculture degree course at Harper Adams University in Shropshire. Part of his role includes looking after the cattle at Vines Farm.

“Another tractor driver called me to say the field was on fire and I knew it was the one with the cows in,” he said. “I jumped in my car in Sonning Common and I could see the smoke as I was driving over from the village so I knew it was bad.

“I got a bucket because they like their meals and as soon as they saw me they came running over and I let them out on to the road.

“My first instinct was to get them out of the field and then I could go and help the firefighters.”

Eight fire crews attended the incident. An off-road vehicle from Bracknell and a specialist vehicle from Maidenhead were also sent to help.

About 40 firefighters were on site for more than two-and-a-half hours and extinguished the fire using six hose reels and beaters.

Roddy Young, who runs the farm, which is owned by Aubrey and Angela Adams, praised the fire service for their quick response times and getting it under control.

If it had spread about another 20 metres the fire could have put 150 acres of wheat at risk.

He and the farm’s arable manager Richard Burroughs had begun harvesting the crop this week.

Mr Young said: “If the wheat had gone up the fire service would not have been able to stop it. We were lucky the fire was in a grass field because the land is tinder dry at present. If the fire had gone through the hedge we would have lost it. It’s fortunate we could see it coming across and were able to stop it.

“We could not praise the fire service enough. They attended in numbers and managed to contain the fire within a couple of hours. As soon as they heard it was a field fire they sent everything.”

Mr Young also praised Mr Moore for his actions, saying he acted exactly as he would have done. He said: “When someone saw the fire they rang all the farm staff. Nathan was the first of us here and he got the cattle away from the fire.

“He did the right thing taking some food out because they are quite greedy, so they will usually follow someone with a bucket of food. They are pedigree animals so there would have been a huge cost. The potential loss is enormous.”

The herd included 25 cows, worth about £2,000 each, and each had a young calf with them which had not been weaned. The cows were also carrying a calf each.

The young and unborn cattle are worth about £1,000 each.

Mr Moore added: “It’s not something I had experienced before so you have to think quickly and know what to do.

“When I arrived the firefighters were already here so I could concentrate on trying to deal with the cattle. They were my main focus to start with.”

Mrs Adams lives in a property on the road between the grass field where the fire happened and the wheat crop, which could have been put in danger.

She could smell the fire and see the flames approaching her home.

Mrs Adams said: “It was absolutely terrifying to see the speed with which the fire shot across the field. There was an awful crackling noise and we were lucky it did not burn our house down. If the fire got to this side of the land then it could have swept across to Sonning Common.

“I had smelled burning and then my neighbour said there was a fire. I could see it out of the bedroom window. I rang the fire brigade and they said it had been reported. Thank goodness someone had happened to see it.”

Mrs Adams and Mr Young said they had both been concerned about field fires due to the number of incidents happening nationally following the exceptionally dry weather. Two weeks ago 800 sq m of land at Ewelme Down Farm was destroyed by a field fire.

The blaze, which is believed to have started accidentally, needed 10 crews to get it under control. Neighbouring farmers also created fire blocks on the edges of their fields by ploughing through crops.

Bernard Wallis lost 66 acres of standing barley plus 50 acres of straw used as bedding for his pigs.

Mr Young, who also grows barley and oil seed rape, said: “Farmers across the country are working hard to harvest their crops in really hot weather because there is a huge risk of fire.

“It would not stop the fire but at least then the crop has been harvested. The farming community is very close so people try to come and help like they did at Ewelme.

“A lot of people was ringing up and making sure we were okay. The last time it was this dry was 1976, where you could see the grass and the verges this parched.”

Mr Young said the fire service had spoken with the neighbour about bonfires.

Mrs Adams said fires in this weather can be “enormously dangerous”. She added: “The fire service, farm staff, friends and family were wonderful and did a terrific job extinguishing it.

“But there should not be bonfires in this weather — the land is tinder dry. I had been hugely nervous about it happening. Thank goodness there were people here to report it.”

The fire service has issued advice for anyone planning to have a bonfire including keeping it away from buildings, fences and trees, keeping a hose or bucket of water nearby, not to use petrol and making sure animals are inside.