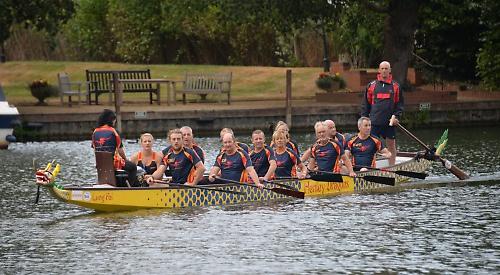 A TRADITIONAL Chinese ceremony was held in Henley to unveil a new dragon boat.

Henley Dragon Boat Club was blessing its new £8,500 vessel on the River Thames at Hobbs of Henley, off Station Road, on Saturday (28) evening.

About 100 people gathered for the ceremony, which is known as “awakening the dragon”.

This saw the two eyes of the dragon painted on by Henley Mayor Glen Lambert and dragon boat racing team member Connor Jones.

The ceremony was done in respect of Chinese custom and is believed to ward off evil spirits and prepare the river for voyage.

The dragon boat club, based at the Eyot Centre, off Wargrave Road, will use the boat for competitions. It will also be hired out to other clubs and for corporate away days at the centre.