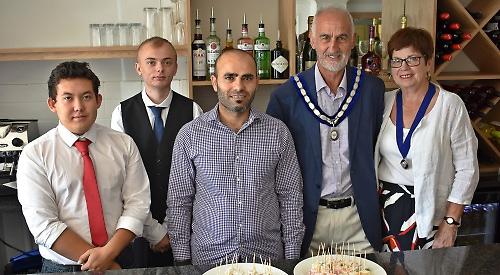 A NEW Mediterreanean restaurant has opened in Henley.

Mezo, which launched at the former Da Luca Italian premises in Market Place on Tuesday, is the first venture by owner Tahsin Kan, a former market trader who lives in Winnersh with his wife Katie.

It offers cuisine from across southern Europe including spaghetti bolognese, lasagna, moussaka and grilled meats as well as beyti and iskender, two kinds of kebab popular in Turkey, where Mr Kan is originally from.

The 37-year-old moved from the city of Diyarbakir to Britain just over a decade ago and had always wanted to own a restaurant but did not have the experience or contacts so he started by working part-time as a waiter in and around Reading.

He discovered the Da Luca premises were available earlier this year and took up the lease as he believed he stood a good chance of succeeding. Over the past two months he has spent about £30,000 on redecorating and replacing the electrics.

There is still more work to be done but he decided to open in order to capitalise on the summer trade. He had hoped to open before the Henley Royal Regatta but it took longer than expected to refurbish the unit.

He has two kitchen staff and a waiting team of two and hopes to recruit a third in the next few weeks.

Mr Kan said: “I moved to Britain for a better life and have always wanted my own place but it has taken time to get everything lined up.

“I was looking for the right place for a long time but I thought Henley was a good location because I often come here to look around and it’s a historic place with a lot of tourism. I’m also the only Turkish restaurant so there’s a lot of potential because I’m not competing directly with anyone.

“There’s still a lot to do because this is a very old building and it cost a lot to get it back into the right condition. I’m feeling a little bit nervous but also optimistic and we’re looking forward to welcoming people.”

Da Luca, which closed in January last year, was originally the Green Olive meze bar before that closed in early in 2014. It was replaced by Rossetti, another Italian, which lasted about two years before Da Luca took over.