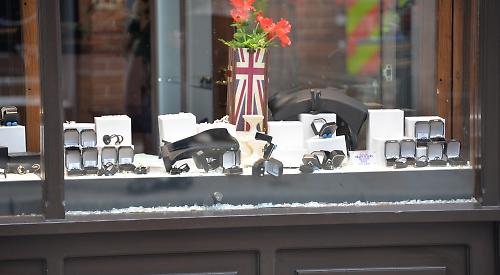 A HENLEY jewellers was targeted in an armed robbery this morning (Wednesday).

Officers are currently on the scene at Anthony Paul Jewellery in Bell Street.

Witnesses reported seeing three men dressed head to toe in black, one carrying a sledgehammer, smash the front window of the business at about 10.30am.

They swept as much jewellery as they could in the space of a few seconds into a bag before escaping down the alleyway between Sainsbury’s and Boots.

This has now been taped off by police.

Detectives are currently on the scene interviewing witnesses and police forensics have arrived.

Witnesses or anyone with information should call Thames Valley Police on 101.