Read all about it... couple are engaged 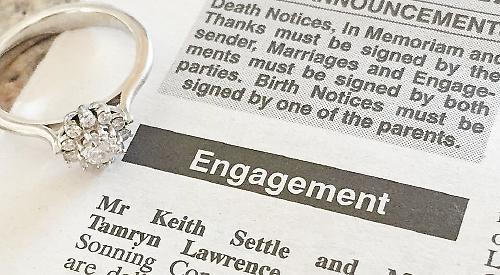 IT may have been just a single sentence but for one couple there was no doubt about what was the biggest news in last week’s Henley Standard.

The engagement of Keith Settle and Tamryn Lawrence was announced on page 6.

But such is the way with modern technology, no announcement is truly complete until it has been posted on social media.

The bride-to-be tweeted: “The Henley Standard has the BIG news story of the week. Of course I might be the tiniest bit biased...”

Miss Lawrence posted a picture of the announcement along with her glittering engagement ring.

I wish the couple all the best for their nuptials.

Congratulations, too, to two more residents — comedian Russell Brand, 43, and his wife Laura Gallacher, 31, who have just had a baby daughter.

The couple, who have lived in the area since November 2015 and tied the knot in Remenham last summer, are already proud parents to 20-month-old Mabel.

Apparently, they didn’t want to make a big fuss about their latest arrival.