Firefighters show what they do at station open day 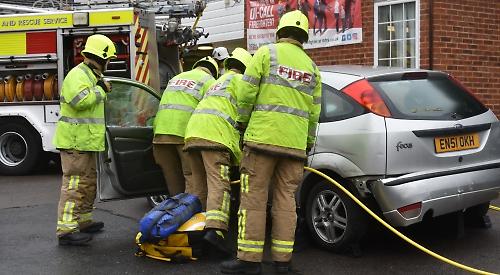 FIREFIGHTERS cut the doors off a car as they “rescued” the victim of a mock car crash during an open day at Wargrave fire station.

The demonstration was the highlight of Sunday’s event, which was attended by dozens of locals.

The visitors to the station in Victoria Road could also look around a fire engine, wear a firefighter’s uniform and try some of the drills and tests taken by the village crew.

Despite rain during the afternoon, many families attended the event and children came dressed in their own firefighter’s outfits.

In the crash demonstration the firefighters used hydraulic cutting equipment to remove the doors of a Ford Focus and save a passenger played by one of the crew inside.

Another crew carried out a rescue from height using the training mast and a dummy placed at the top.

There was also a demonstration of the dangers of putting water on a hot oil fire and other examples of the specialist equipment firefighters use during rescues.

Children could try to extinguish fire targets using a high pressure hose as well as dress up in a firefighter’s boots, leggings, tunic, helmet, gloves and breathing apparatus. There was also an equipment assembly challenge for adults based on entry tests required to join the service. A tuck shop raised more than £190 for the Fire Fighters Charity.

Crew manager Jon Murby said: “Thanks must go to all the crew members and volunteers who came to make sure the demonstrations ran successfully.

“Despite the weather, we were delighted by the number of people who came to see their local fire station.”

The retained station is at risk of closure unless it can increase the availability of its crew. This follows a public consultation on plans by the Royal Berkshire Fire Authority to cut costs.

Residents across the county were asked to state their preference from seven possible measures to save £1.4 million. The most popular proposal was to close Wargrave and Pangbourne fire stations.

However, following a campaign by residents and councillors, the authority agreed to allow the Wargrave station to stay open for another 12 months during which it must increase the availability of its crew to 60 per cent.

If you want to join Royal Berkshire Fire and Rescue Service as an on-call firefighter, email recruitment@rbfrs.co.uk