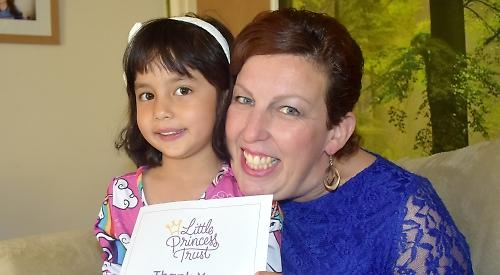 A YOUNG girl has donated her hair to children who are undergoing medical treatment.

Jessica Dingle, five, had about 20cm of her waist-length locks cut off and then sent them to the Little Princess Trust, which makes wigs for youngsters who have lost their hair as a side effect of chemotherapy used to treat cancer or because of other illnesses.

She received a certificate of thanks from the charity.

Jessica, of Luker Avenue, Henley, came up with the idea after visiting Wexham Park Hospital near Slough with her mother Victoria, who has rheumatoid arthritis and needs regular treatment.

While they waited for Ms Dingle’s appointment, she played with another girl who had no hair due to alopecia and afterwards she asked her mother why this was.

When Ms Dingle explained, Jessica asked if she could give the girl some of her hair. Mrs Dingle said: “When we got back from the hospital she asked, ‘how come I’m so lucky with lots of hair and she hasn’t got any?’

“They’d played beautifully together and Jess didn’t say anything until afterwards because she didn’t want to make the other girl uncomfortable. She said, ‘I could get my hair cut to my shoulders and give some to her’ and I was very touched but not shocked as that’s so typical of her.

“She always wants to help other people and be kind as I have a disability so she sees everyone as equal and isn’t bothered by difference.

“We were going to get her hair cut for the summer anyway as it had become very long. It had been trimmed and tidied every month but had been growing for about a year.”

Jessica, who will start her second year at Sacred Heart Primary School in Greys Hill, Henley, next month, had her hair cut by a family friend at home. She said: “It was fun and I like my shorter hair because it’s much easier to brush.”

Ms Dingle said: “She’s usually very active because she’s into dancing and gymnastics but she behaved well during the cut and sat still for about an hour.

“She was really pleased to receive her certificate because it’s a lovely thing to have at that age and it’s nice to know you’ve made a difference.”

Jessica intends to carry out more acts of kindness for friends and neighbours during the summer holidays, including giving flowers, baking cakes and creating drawings.

Ms Dingle said: “I’m incredibly proud of Jessica as she is a joy and completely selfless. Even her latest school report said she was kind, caring and a delight, which is what you want to hear as a parent.

“We’re looking forward to all the things we’re going to do together over the summer. It will depend on my arthritis because some days are better than others but she can always do her arts and crafts, which she enjoys a lot.

“She has previously put artworks through a neighbour’s door to cheer them up when they were unwell. It’s always nice when people do things just to make others smile without expecting praise or thanks.”