Family of four caught up in Indonesian earthquake 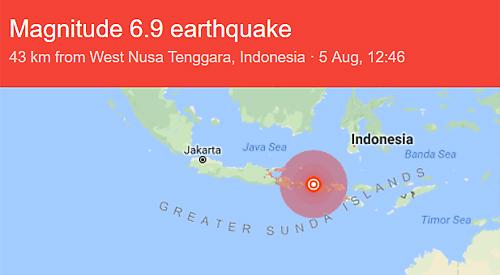 The family, who haven’t been named, includes a 38-year-old mother, 40-year-old father and two children, aged seven and five who were visiting the nearby island of Gili Trawangan.

A relative said they had witnessed looting and panic after the earthquake but that they were now in a hotel with access to water.

He said: "We've been looking at trying to charter helicopters to get them off the island, but we've heard now they're booked up until August 15.

"My daughter did say there was looting going on, but we've had another message to say the authorities had taken control and some order had been resumed.

"The kids are quite traumatised, I've spoken to my daughter and she's clearly very frightened and very scared - frankly they just want to come home.”

A quake hit Lombok last week, killing 16 people, and the relative added that the family had been caught up in this as well.