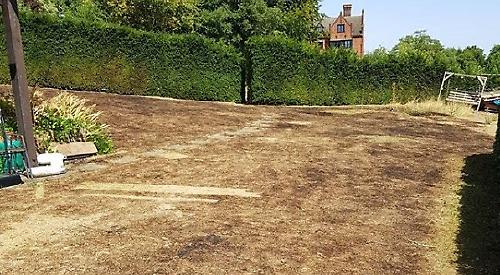 THE headmaster of Shiplake College had to put out a fire in his garden after a glass bottle caused the dry grass to catch light.

Gregg Davies used his garden hose to tackle the flames outside his home in the college grounds on Monday.

Mr Davies was laying out camping equipment when the incident happened.

He said: “It was about 11.30am, when the sun was at its hottest. The sun was so strong that it magnified on the glass bottle and set fire to a bit of grass.”

The fire spread before he was able to get it under control and a large patch of lawn was left blackened.

Mr Davies said: “It was a bit of a shock and quite interesting but thankfully it hadn’t gone very far and even my little hose was able to put it out.

“It didn’t get any of the hedge or my woodwork, just a bit of the grass.”

A crew from Henley fire station attended to check the fire was extinguished.

Later that day, Mr Davies tweeted photos of the damage and said: “Whoops. Thanks to Shiplake College maintenance and Henley fire station for helping douse our little conflagration in the garden.”