Man swims Channel and is too sick to celebrate! 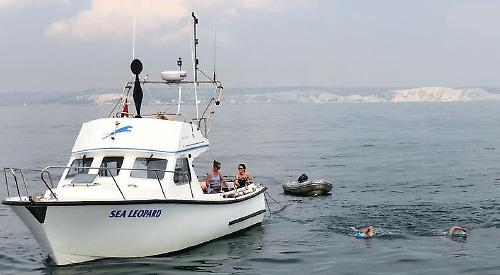 A MAN from Cockpole Green swam the Channel for charity — and was then too ill to celebrate.

Peter Lowe, 50, had to combat jellyfish stings, busy shipping lanes and swimming in pitch darkness to complete the 20-mile challenge from Dover to Calais in just under 14 hours.

He was then sick on the boat all the way back to England and couldn’t drink the champagne that his brothers had brought him to celebrate.

Mr Lowe was swimming in aid of Cancer Research UK after his wife Krista, 45, was successfully treated for breast cancer and he raised more than £2,000.

Twenty-one years ago, he rowed the Atlantic Ocean.

The father-of-three, who runs his own commercial property business, registered for the Channel challenge two years ago after taking up open-water swimming when he lived in Brixton and discovered the local lido.

He trained at the Henley leisure centre pool, on the River Thames in Wargrave and Hurley and in the sea at Bournemouth and Dover as well as attending training camps in Spain.

He was supported by Swim to Live, which promotes swimming as a healthy activity, and Align Pilates and Athlete Service in Henley.

Mr Lowe said: “I have always enjoyed swimming in cold water, having started when I was living in Brixton and discovered a lido in my local park.

“Now I swim in the Thames in various locations and my training has meant that I no longer do
20-minute dips but a variety of stretches. I use a mixture of the Wargrave stretch and the Hurley stretch but I avoid the regatta course because of all the rowers.

“I also regularly travel to the coast to swim at Dover, where Channel swimmers gather at the beginning of the season in early May, or at Bournemouth.”

He had a trial run with his “pilot” Stuart Gleeson, skipper of his support boat Sea Leopard in May, where he spent three hours swimming in the sea in Dover.

Mr Lowe had planned to attempt to swim the Channel later this month but was offered the chance to do it on July 25 after the heatwave increased the sea temperature.

He said: “I received a phone call from my pilot asking if I would be prepared to set off earlier than my allotted slot. After much consideration and conversations with various swimming friends and my family, I decided to take the chance regardless of ongoing aches and pains.”

He set off from Samphire Hoe at 9am with a support team comprising his wife and friends Hannah Young, Mike Whitworth, Will Watt and Steve Williams who took turns to feed him in the water and swim alongside him.

Mrs Young, who lives in Wargrave, swam the Channel in 2014 and Mr Lowe was part of her support team.

He said: “They were hugely helpful. They were there to encourage me but the main thing was pulling me in for feeds every 30 minutes, which included carbohydrate drinks and chocolate bars or a small sandwich.

“The weather was stunning and so I set off in a relaxed mood but soon the demons start to play with your mind.

“Although I was swimming in beautiful, calm and apparently warm water, the mind plays tricks and was telling me it was cold and suggesting that maybe I wasn’t a swimmer after all.

“My spirits were lifted when another Channel swimmer was returning from his completed swim and circled my boat and wished me good luck.

“My first jellyfish sting came as a bit of a shock, whipping across my face and catching my lip, chin and forehead which made me angry more than anything else. I was clipped several more times during the swim.”

He said that avoiding the huge ships was like crossing a motorway on foot.

Mr Lowe said: “First you go across the English side of the motorway, then get to the central reservation, which is a bit calmer for about a mile, and then the mile on the French side.

“Once out of that you then have to complete the last three miles when you can see France but it never seems to get any closer.”

He arrived at Tardinghen beach at 10.58pm, when it was pitch black, before getting on the boat to return to England. He was violently sick the whole way back.

Mr Lowe said: “When we got back to Dover it was 2am and it was desolate except for two characters running around in the harbour. I thought they were other Channel swimmers and then they shouted out to me.”

They turned out to be Mr Lowe’s brothers, Charles, from Stoke Row, and Jeremy, who had travelled to welcome him home with a bottle of champagne but he did not feel well enough to drink any.

He said he was pleased with his achievement and had made a lot of friends as a result.

Mr Lowe said: “I have met truly amazing people on my coastal and long-distance training trips.

“Marathon swimmers are not always the most athletic-looking people as you have to have a fair amount of bulk to cope with cold water. I call the people I meet ‘ordinary extraordinary’.”