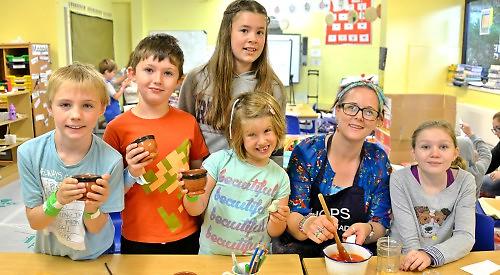 THE first Henley Outdoor Play Scheme to be held at its new venue has been hailed a success.

About 150 children per day attended the event at Badgemore Primary School in Hop Gardens from Monday to Friday last week.

It had moved from its regular home at Trinity Primary School in Vicarage Road due to a rent increase.

There were indoor and outdoor activities, including a craft room where children made candles by pouring hot wax into cups or created insects and flowers using balls and sheets of fuzzy material.

There was a festival room with hair braiding, henna tattoos and face and nail painting, a sewing room and a cooking area where children made “pizza faces” and decorated biscuits with icing and sweets.

Others enjoyed woodwork in the school playground and built objects ranging from cars, helicopters and animals to an entire townscape with roads, cars, houses and a church with gravestones and a working clock.

An inflatable slide and assault course were set up on the school field and organisers purchased their own foam slide so children could use it throughout the week instead of just hiring one as a treat for the final day.

There was laser tag in the school garden and a tuck shop run by parents.

Children could also relax and read books in the library.

There was a “special” event on each of the five days which included a science workshop with demonstrations of a smoke machine, circus skills, magic tricks and a dance class with Henley instructor Steph Maxwell, who runs Steph’s Dancing Divas and Dudes.

Children could take part in whichever activity they wanted at any time and were supervised by a team of about 30 “play helpers”, mostly older teenagers and young adults who had attended the scheme as children.

They included Jessica Weatherley, of Friday Street, Henley, who attended every year since the age of six and was a helper for the second year running.

The 17-year-old former Sacred Heart primary and Gillotts School pupil said: “I always enjoyed it as it was something to break up the long holiday and a chance to meet all your friends as well as making new ones from other schools.

“I used to enjoy lots of different things, from the hair and beauty activities to the foam slide.

“It’s nice to be giving something back and I think a lot of helpers feel the same way.

“It feels weird because I remember looking at the helpers and thinking they seemed so much bigger and older but now I’m one of them!” Emma Taylor, who took over as chairwoman from Vanessa Lakatos in 2016, said: “It’s a huge effort to set something like this up but it’s worth it to see the children enjoy it.

“They have the freedom to do what they like without a rigid structure but with careful supervision and it’s lovely to see how excited they are to tell their parents about it at the end of the day.

“Attendance is a bit lower than last year as we can take up to 250 children a day but it’s a good start considering we’re on a new site.

“It might be down to the Brexit effect or it might just be that families are going straight off on holiday as the weather has been so nice.”

The playscheme, which has been going more than 40 years, is supported by removal firm Wilkins of Henley, which stores the equipment free of charge.