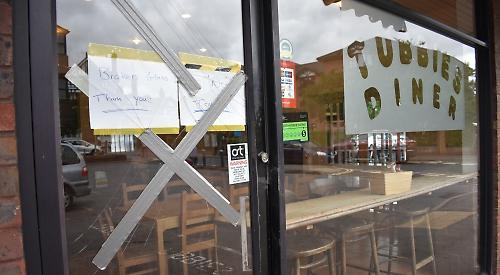 THIEVES stole £150 of tips and caused about £1,500 of damage after breaking into a Henley diner.

Tubbies Diner, which is run by husband and wife Jason and Courtney Probets, was targeted shortly after 5am on Sunday.

Mr Probets, who lives in Woodley, was alerted by a passer-by and rushed to the scene to find the offenders had used a crowbar to break in via his front door, cracking the glass in the process.

They also took drinks from a fridge but left it open, causing the motor to burn out, meaning he will have to purchase a new one.

Speaking on Wednesday he said: “It’s absolutely pointless. The police haven’t even come to see me and it’s four and half days afterwards. I reported it to them immediately.

“They definitely used a crowbar, they have hooked it under the lock. I actually think it’s someone who comes in here to know where the tip jars are.

He added that there was CCTV camera fitted on the side of Hallmark House opposite and he wants to see the footage.

Mr Proberts, who doesn’t open on Sundays, said he was annoyed at having to come in on his day off with his children and wait six hours for his door to be repaired. He was able to open on Monday as normal.