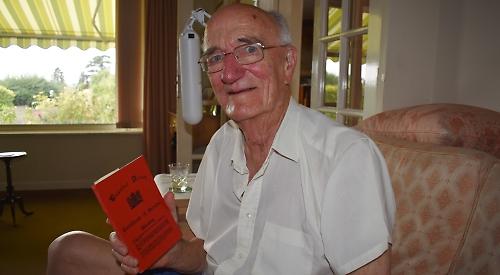 AN army veteran from Wargrave was invited to a party held to celebrate a film set during the Second World War.

John Fryer served in Italy when he was still a teenager and was part of a team supervising the transport of thousands of German prisoners of war back home after the Allied victory.

More than 70 years on, he was among veterans invited by the Royal British Legion to the cocktail party in London to mark the DVD release of The Darkest Hour, which stars Gary Oldman as Winston Churchill, who was Prime Minister during the war.

Mr Fryer was only two when his family moved to Wargrave and was 18 when he joined the army, giving up an engineering course in the Midlands.

He joined the Rifle Brigade and was given training in Yorkshire followed by officer training in Winchester before being posted to Rimini in northern Italy.

Mr Fryer said he was chosen by his commanding officers who thought that he could speak German and would be able to translate.

“I was there for three-and-a-half years and we had to get 800 at a time on to a train full of wagons.

“Me, the sergeant and eight men would be on the carriage in front. We weren’t allowed to call them prisoners. We had ‘surrounded enemy personnel’.

“A lot of the men in the Rifle Brigade were from the East End and were a very tough bunch.”

During this time Mr Fryer travelled to Russian, French and Yugoslavian territories before returning home in 1947.

He then spent some time at Italian labour camps in Devon.

He said: “My job was to travel round farms to persuade them to take more labour for the harvest.”

Mr Fryer spent most of his working life at the Allen & Simmonds piston ring factory in Reading, originally as a draughtsman before taking over the factory from his father.

He lived in Caversham and Peppard before settling at his current home in Walled Garden, Wargrave, with his wife Maureen 30 years ago.

He has been a member of the Wargrave branch of the Legion for more than 25 years and spent four years organising the village’s Poppy Appeal.

He has also been a member of the local branch of the Royal National Lifeboat Institution and a councillor and is now a volunteer driver for the elderly.

The cocktail party at Wigmore Hall was attended by fellow veterans from Berkshire and Surrey.

Mr Fryer said: “It was very good and I thoroughly enjoyed it.

“I thought I would be the oldest there but there were people aged 95 to 100 there.

“The fact is I was in the war but I didn’t do anything!”

Darkest Hour was released in January and won two Academy Awards, including best actor for Oldman.