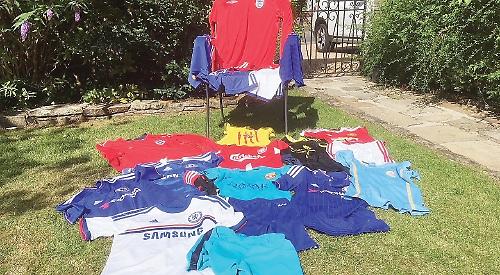 A WOMAN is collecting football shirts for orphans in Albania after being touched by their love of the sport.

Victoria Dunne, a physiotherapist from Hennerton, near Crazies Hill, spent two weeks in the town of Sarandë in May in support of a charity.

She visited the Shkollare Orphanage to help some of the children there with physical and cognitive disabilities.

Mrs Dunne, 43, was offered the chance to visit the country by Help in Action, a charity founded by her two friends, Dr Steve Courtney and his wife Ruth, eight years ago.

While there, she noticed many of the orphans had few possessions but wore replica shirts of English football teams including Chelsea and Arsenal and liked to share their knowledge of the game.

Mrs Dunne, who lives with her husband Chris, 42, who works in IT, and their children, Annabella, nine, and Penelope, seven, said: “They were so proud of their shirts. They knew everything about the Premier League and when I said I was from near London they asked if I was Chelsea or Arsenal.

“Then when I said ‘Reading’ they said it was near Wycombe.

“They love the British football leagues, learn British geography through the teams and know all the players.

“One boy was wearing a Bolton Wanderers shirt. I felt quite emotional because of all the teams to pick he got Bolton.

“In two years’ time he’s going to be 16 and will be out of the orphanage with nothing.

“He has no family or support and the joy he was getting out of that shirt seemed disproportionate.”

When she returned home, Mrs Dunne felt compelled to do something for the orphans so she launched an appeal for old football shirts to send to Albania. She left messages on Facebook community groups and alerted Crazies Hill Primary School, where her daughters are pupils.

So far she has received about 30 shirts from friends, fellow parents and villagers.

Mrs Dunne said: “It’s such a simple thing to get a shirt to take back, so I started doing it as a sideline.

“Lots of shirts were brought into school and people sent emails so I could pick them up or dropped them into my work.

“I was even given some football boots but most of the towns in Albania are concrete so there’s no point in taking them.

“The joy of football is that you just need a ball, you don’t need any specialist equipment.”

Mrs Dunne, who does not follow football herself, says she has received Chelsea, Reading and England shirts, among others.

Her daughters’ school, where she used to chair the parents’ association, held an “Albania Day” where children raised almost £400 by wearing their own clothes and holding a bake sale.

Mrs Dunne said: “The school has been absolutely incredible. Two children even came in with their birthday money — £20 each. At the end of term the school also came up with a big bag of shirts.”

The shirts have been packed up ready to be sent to the orphanage next month and she is hoping to return to Albania in October.

Mrs Dunne has also been fund-raising for walking frames and aids to give to the Albanians.

She said: “All the children we met are in great need. I was the first physio they had ever seen.

“One nine-year-old child had cerebral palsy but had no access to walking aids or splints.

“I met some wonderful parents doing their best in challenging circumstances. The Albanians are lovely people.”

To make a donation, email Mrs Dunne on victoriadunne@hotmail.co.uk