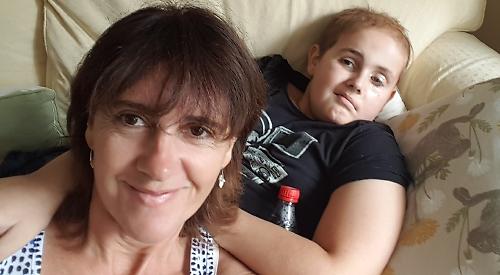 THE parents of a boy fighting cancer say taking him to Turkey for specialist treatment was the best decision they ever made.

Charlie Ilsley, 11, from Emmer Green, flew to Ankara with his parents Toni and Mark to undergo CyberKnife treatment in an attempt to eradicate two tumours on his spine.

The treatment, which is the latest in radiotherapy, is not available to children at the John Radcliffe Hospital in Oxford, where he had surgery previously.

The family, who live in Buckingham Drive, spent three-and-a-half-weeks in the country, before returning home on Monday night. His mother said: “They were lovely, the people in the hospital and the doctors were fantastic. I could relax and I knew that at least he was having treatment.

“The doctor said ‘we’re not offering a miracle, we’re offering hope’. He’s confident the treatment will go well and we’ll get Charlie back to remission.”

She added: “One hundred per cent it was the best choice and best move and we couldn’t afford to wait any longer.”

The family believed they would only be away for 10 days but Charlie spent the first week having a series of tests and scans before six days of CyberKnife treatment, which delivers a high dose of radiotherapy with pinpoint accuracy. They then had a four-day stay in a hotel before Charlie started six days of chemotherapy.

They will be returning to Turkey on September 9 ready to start further chemotherapy treatment, which will last a week. The Ilsleys then face trips there for the next six months and their son will have an MRI scan in October to see if his tumours have shrunk.

Charlie, who is due to start at Highdown School next month, first showed signs of being ill in March 2015 when he started being sick in the mornings. After a CT scan, doctors discovered a tumour in the back of his brain about the size of a snooker ball. Another tumour was found on his spine. He underwent a 10-hour operation in April that year in which his brain tumour was partially removed. Doctors said that without the surgery he might have had only weeks to live.

He then underwent 31 sessions of radiotherapy to his head and spine at the Churchill Hospital in Oxford followed by chemotherapy before he was given the all-clear in March 2016. But in March this year two tumours on his spine were discovered.