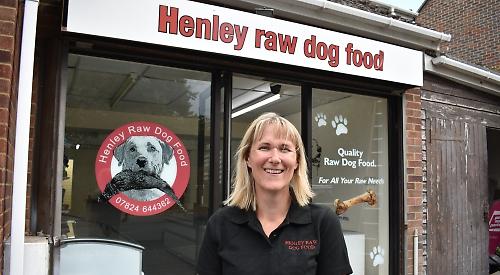 A WOMAN who started making dog food for family and friends has now opened a shop to sell it.

Nikki Thatcher, 38, started Henley Raw Dog Food as an online business last year and has attracted so much custom that she has now rented a shop in Greys Hill.

She makes the food from raw meat including chicken, rabbit and ox. It includes minced combinations or whole cuts including chicken wings and lamb ribs. She offers dozens of different recipes and also delivers locally.

Mrs Thatcher, who lives in Lower Assendon with husband James, their four children and retrievers Ruby and Norman, said: “My dogs have always been raw-fed.

“You have to ship the meat in by courier so I began making my own and that’s how it all started.

“I was making it for friends and family and they said I should start doing it properly. We make it all ourselves from local produce.” The shop, which used to be attached to the Takhar Wine Mart and shop, also sells accessories including food bowls, leads and dog toys.

Mrs Thatcher, whose 16-year-old son Charlie and friend Nikki Cryer also work at the shop, said: “Getting a shop was the long-term plan but everywhere in town was very expensive. When this one came up it was perfect.

“The landlord refurbished it so it was all ready to go. We’ve had a lot of walk-ins and some people have said they didn’t even know we existed before they saw the shop. Henley is a dog-friendly town.”

Mrs Thatcher says many owners don’t know about the benefits of raw food to their dog, which include healthier teeth and fur.

She said: “People who have always fed kibble might not have fed or even seen raw before. It’s more natural and healthy but sometimes people want to see it first, so it’s nice that they can come in to have a chat.”