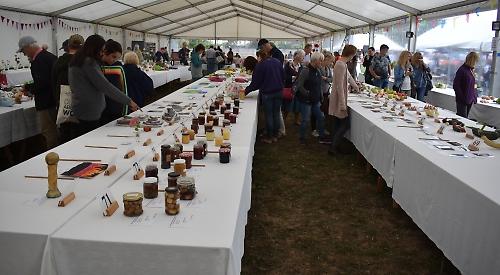 Nigel and Stephen Head, who both live in the village, scooped several prizes for their entries in the vegetable, fruit and preserve classes at the annual event on Saturday (25).

The pair share an allotment where they grow most of their produce.

He said: “It’s such a good family show and as we live in the next road along it makes sense to enter.

“I’ve always had an interest in gardening from a young age and about five years ago I got an allotment and it has all progressed from there. I mainly focus on the vegetable side of things.”

Younger brother Stephen, 50, a gardener, was the winner of the Mrs Stephenson Cup, the Shakler Memorial Cup for preserves and cookery and the Grace Smith Memorial Bowl.

“Flowers and fruit are the main things I like to grow,” he said. “I’ve done a lot more cooking for this year’s show making preserves and jams.

“I also did cakes this year, which is what I won one of the cups for.”

For pictures, results and full coverage of the show, see this week’s Henley Standard.