Hundreds enjoy Regatta for the Disabled 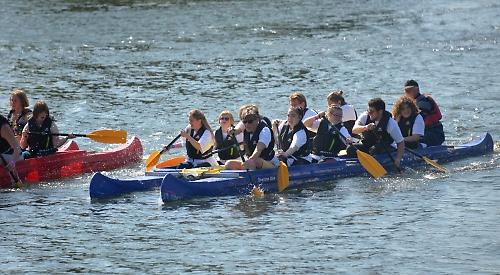 THE ninth annual Henley Regatta for the Disabled has been hailed the best ever.

Chairman Mike Pooley said the warm weather, large crowds and range of activities on offer had made it a memorable day.

More than 800 people visited the grounds of Phyllis Court Club, off Marlow Road, on Saturday for fun on the River Thames and on the bank.

Dozens of disabled and able-bodied rowers took part in bell boat races throughout the day, which resemble two canoes bound together, between Henley Bridge and the paddock of the private members’ club.

The regatta was opened by Henley MP John Howell, who commentated on the first three races of the day and tested out his rowing skills on an ergo.

There were also trips on the river in the cruiser Rivertime - a wheelchair accessible boat - and in two smaller boats provided by Hobbs of Henley.

Other activities for children included Professor Moon’s Punch and Judy show and a storyteller, while entertainment was provided by Sam Brown’s Fabulous Ukulele Club and the Henley Rock Choir. Visitors could also have a go at playing the ukulele in the marquee in the afternoon.

There was also face painting, Millars Ark Animals, a climbing wall with a hoist, rowing machines, craft stalls and side shows, circus skills and the Percy Play Bus.

Prizes and certificates were presented by Mayor of Henley Glen Lambert and Barry Jackson, the chairman of Phyllis Court Club.