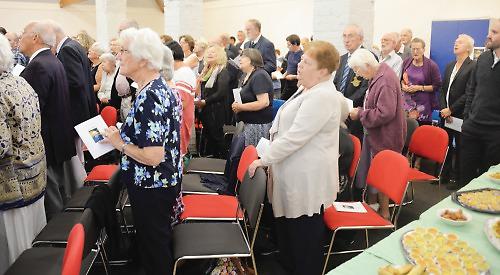 MORE than 100 people attended a memorial service for the former leader of Henley Baptist Church.

Dave Prior died at the Sue Ryder hospice in Nettlebed on August 17 after a battle with non-Hodgkin’s lymphoma, a type of cancer. He was 73.

The celebration of his life was held at the d:two centre in Market Place, which he managed, on Thursday last week.

Friends and family, including his wife Sue and sons Tim, Matt and Steve, crowded inside the hall with many more in the hallway outside.

They heard tributes and reflections on Mr Prior’s life and sang hymns as well as watching a photo montage to a rendition of You Lift Me Up by pianist Kirsty Prior.

There was a bucket collection for Sue Ryder and messages from youth groups in Malawi, including the Glad Tidings Orphan Care Centre, which Mr and Mrs Prior visited.

Mr Prior had helped his wife with the management of the Nomad youth and community project, which is run from the centre.

His sister Chris Oakes shared memories of their childhood in Caversham, saying he helped her with her school homework and taught her how to ride a bike as well as introducing her to Christianity and the Bible.

Roger Cole, pastor at Henley Baptist Church, said Mr Prior had a strong faith throughout his life.

He said: “As Christians, we believe this isn’t the end and Dave has gone to be with the Father.

“There’s sadness for us but joy for him. Thank-you for coming together tonight to acknowledge his life and all that it meant.

“I believe the town was a better place because Dave was around.”

Mr Prior’s son Matt said: “It’s quite hard to know what to say at a time like this but I’ve got some happy memories.

“Dad has been such an influence in my life and helped me to be the man I am today.

“The cards we have had mean so much to us and show us how many lives mum and dad touched over the years.”

His other son Tim, who has taken over the running of Nomad, gave an emotional speech, pausing several times and being comforted by his mother.

He said: “Dad had a kind heart and loved to help people — that’s what he was good at. Nothing was too much and in times of trouble Dad was there to help you.

“At a time when dads are increasingly absent or don’t step up to the mark, I feel incredibly blessed to have had a great one.”

There were readings from the Bible and speeches by friends John Angliss, Ken Jones, Mark Sayers and Michelle Payne, along with Mrs Prior.

These included funny stories and jokes about Mr Prior’s knack for organisation.

Tim Prior told how during his father’s last days at the hospice he had helped him walk slowly to the toilet only to be told that he didn’t need to go and only wanted to know the way for when he did.

Mrs Prior said: “We are overwhelmed by the messages and cards. I don’t know what the postman thinks at the moment because it’s like Christmas with all the letters!

“Reading some of the messages and understanding the impact Dave has had on many people through the years, I’m incredibly humbled and I know he would have been as well.

“In the days after Dave’s passing, I realised I was not only losing my husband, my boys’ father and the church leader, I had lost my best friend.

“We fitted together like a hand and a glove. I couldn’t have done what we’ve done at Nomad without Dave behind me.

“Dave loved life and didn’t want to die but he wasn’t afraid of death.”