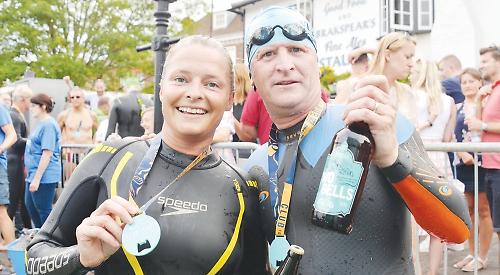 HENLEY pub operator and brewer Brakspear is in line for two beer awards.

The company has been nominated in the Beer & Cider Marketing Awards for best corporate social responsibility initiative for its Honey Bee ale and best sponsorship for its support of the annual Henley Club to Pub Swim.

Honey Bee, which was first brewed in 2015, raises money for the Friends of the Earth’s Bee Cause campaign, which helps to protect the declining bee populations.

The Club to Pub Swim, a 1.5km swim from Henley Rowing Club in Wargrave Road to the Angel on the Bridge pub in Thames Side, is part of the Henley Swim series and was established in 2014.

More than 600 swimmers took part in this year’s event in July. Each finisher received a bottle of Brakspear’s Two Bells beer, which is brewed specially for the event and is named after the challenge to complete the swim between the 7pm and 8pm chimes of the bells at St Mary’s Church.

Emma Sweet, Brakspear marketing manager, said: “We’re delighted to have progressed to the finals in this competition, which places us alongside some much larger brewers with larger marketing budgets.”

Henley Swim founder Jeremy Laming added: “The Club to Pub Swim has become a community event, actively encouraging new people to open water swimming. From the outset, Brakspear has been a fantastic partner, instilling a sense of fun into the event. All the swimmers look forward to receiving their bottle with its funky swim design and the medal incorporating a bottle opener.”

Sandra Bell, a nature campaigner at Friends of the Earth, said: “Bees have a huge role to play when it comes to beer and cider production, with their honey adding a delicious twist to drinks like Honey Bee.”

The award winners will be announced on September 20.