Chef tastes success after all 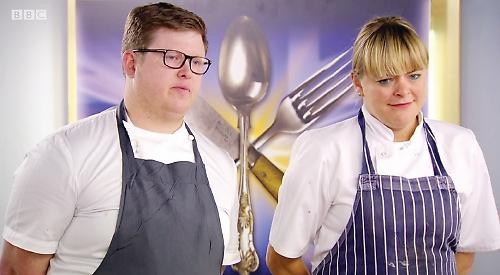 A CHEF from Shiplake has spoken of his joy at being featured in the new Good Food Guide — after being knocked out of a TV cooking competition for the second time.

Ryan Simpson-Trotman is chef-proprietor of Orwells restaurant in Shiplake Row, which is the only restaurant in Oxfordshire in the top 30 in Britain listed in the 2019 guide.

He learned of the accolade after being eliminated from the BBC’s Great British Menu after five episodes broadcast last week.

Mr Simpson-Trotman, 35, who runs the business with his husband Liam, said the recognition felt “absolutely overwhelming”.

“This is one of the top guides in the UK,” he said.

“It shows that our customers appreciate the consistency in our cooking as we are always pushing ourselves, always improving.

“When we come in every day and put on our aprons we have one goal and that’s to put a smile on someone’s face.

“When you have that mentality, it shines through. We love what we do.”

Other local restaurants to be included in the guide include Shaun Dickens at the Boathouse in Station Road, Henley, the Miller of Mansfield in Goring and Hurley House in Hurley.

Mr Simpson-Trotman was one of three professional chefs competing in the central England regional heat of Great British Menu to be in with a chance of cooking at a banquet to mark the 70th anniversary of the National Health Service.

He also took part last year when he again failed to reach the finals.

This time he was up against Marianne Lumb, who runs her own restaurant in London, and Sabrina Gidda, who specialises in fusion cooking.

They had to prepare a starter, fish course, main dish and dessert on successive days, which were judged by Daniel Clifford, a past winner of the competition and holder of two Michelin stars.

The two chefs with the highest overall scores then cooked all four dishes for a judging panel on Friday’s episode.

Mr Simpson-Trotman’s starter was called An Apple a Day, a savoury doughnut made with pork cheek and served with a brown sauce ice cream which he said would taste like a bacon sandwich.

However, he found that the ice cream was not setting properly. He said: “The knob was on the wrong way round and I thought it was on churn but it was actually on cleaning mode so my ice cream has been cleaning itself for the last 15 minutes.”

He then left it too long in the blast chiller so it had frozen solid, ruining its smooth texture, and he had to soften it on the stove.

Mr Simpson-Trotman admitted it came out “more like an iceberg than an ice cream” due to this “stupid little error” and was given a score of six, putting him in third place behind Lumb and Gidda, who both scored seven with their starters of potato and truffle and chicken soup respectively.

Mr Simpson-Trotman’s fish course dish was called Goodbye Brain Fog and focused on the health benefits of fish that are high in Omega-3 oils.

The ingredients included salmon, hemp oil, miso, tomatoes and avocado as well as caviar to give a touch of “luxury”.

Mr Simpson-Trotman said: “There’s lots of big flavours going on in this dish. It’s hit after hit, after hit of umami. What I’m trying to do is pack flavour into every little element.” Clifford said: “The barbecued salmon was cooked to perfection and the miso dressing was perfectly balanced. However, I felt the dish needed another texture, something crisp to bring it together.”

Mr Simpson-Trotman’s main course was called Just What the Doctor Ordered which he said was a celebration of the best of what the British Isles had to offer.

It included a muntjac deer from the Chilterns, sea kale from Wales and Girolle mushrooms from Scotland.

Mr Simpson-Trotman told viewers: “I’m going to break the whole animal down, use the loins and, not only that, I’m going to use all the other trim for the sausages for another hit of muntjac.”

Clifford called it a “really clever” dish, adding: “My biggest disappointment was the portion size. However, that’s because everything on that plate tasted exquisite.”

He awarded 10 points which moved Mr Simpson-Trotman up to second place, a point behind Lumb, who was awarded nine for her muntjac dish, while Gidda plummeted from first to last after only receiving five points for her saddle of lamb en croute.

“Literally every bite you take will be a spoonful of sugar,” he said.

He served it with a mini bottle of hazelnut liquor, the “medicine” to his spoonful of sugar, saying: “As it says on the bottle, a spoonful of sugar really helps the medicine go down while you’re enjoying a plate full of loveliness.”

Clifford thought the dish was too rich and awarded a score of eight which put Mr Simpson-Trotman level on points with Lumb, who scored seven with her Bakewell soufflé, and both went through to Friday’s cook-off. The judges were restaurateur Oliver Peyton, food critic Matthew Fort, cook Andi Oliver and Dan Smith, a paramedic for the North West Ambulance Service.

However, despite complimenting his food, they were disappointed.

Oliver said: “He hasn’t shown us his best work” and Peyton added: “He’s like a firework that hasn’t gone off.”

Peyton thought his muntjac was a “little bit tougher” and Oliver thought it was “drier”.

The judges then heaped praise on his dessert awarding it 39 out of 40 points.

Mr Smith said it was his favourite dish, adding: “There isn’t anything that isn’t beautiful on this plate.”

Peyton said it was “a winner” and Fort added: “What a fabulous note to end up on.”

However, this wasn’t enough and the judges put Lumb through to the next round.

Mr Simpson-Trotman admitted that the best chef had won, adding: “It does hit you inside quite hard.”

Now he will be hoping his husband, Liam, goes better when he takes part in the north-west heat during the week after next.