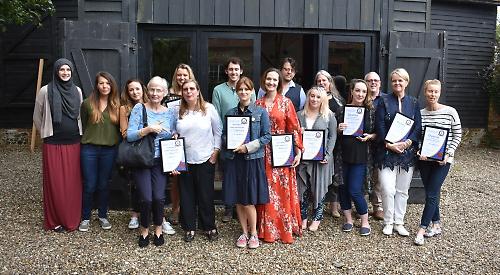 THE first batch of students has graduated from a new upholstery school in Nettlebed.

The British School of Upholstered Furniture was formed at Manor Farm in October last year and is led by Gregory Culpitt-Jones, an award-winning master upholsterer who runs Cottage Upholstery in the village.

Mr Culpitt-Jones tutored 24 students one day a week along with his colleague Gareth Rees, from Chalgrove, offering Association of Master Upholsterers and Soft Furnishers diploma programme levels 1, 2 and 3, as well as other short courses and lectures.

A graduation ceremony was held at the venue on Saturday, August 18, where the students were presented with certificates and had their work displayed. They included Zoe Bateman, who signed up for the course after taking redundancy from her job in oil and gas management.

Mrs Bateman, 45, who lives in Woodcote Road, Caversham, with her husband Steven and their two children, also won an external award for her final piece, an ottoman stool.

She said: “I wanted to do something completely different. I love chairs — I’ve got a house full of them, as my husband will attest to, and I love fabric so it seemed a natural way into a new career.

“I really loved the course — it was one of the best things I’ve done. It was really challenging and the teaching was excellent.

“They are really patient and very skilled. I hadn’t done any upholstery before but they took me on.”

Mr Culpitt-Jones, who lives in the village, says he already has 46 people signed up for this year’s course, with many of the graduates returning for a second year.

He said: “We have enjoyed it. Gareth and I used to teach at different training centres but we decided to join forces and open a school in this area.

“There was nowhere else round here — you had to go to London or Bristol.

“We are aiming to get more local people involved and eventually turn it in to a degree course with university status. It’s a great location.

“We had a good turnout for the ceremony and were missing only a couple of students.

“We had a lot of people from the trade who were impressed with the work the first years had done.

“For many of them it was the first time they’d picked up a needle and thread so we were very impressed.”