Couple celebrate 60 years of marriage with a skydive 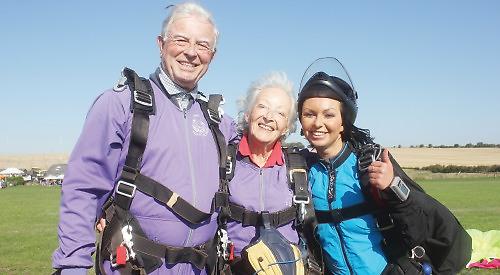 A COUPLE celebrated their forthcoming 60th wedding anniversary with a skydive.

Joy and David Chambers, who are both in their early eighties, jumped out of a plane 12,000ft over Ipsden.

They had never skydived before but decided to take on the challenge after their grandson James completed one in Swindon shortly before Mrs Chambers’ 80th birthday more than a year ago.

Mrs Chambers was so excited by this that she wanted to follow suit but was told she needed a doctor’s certificate due to her age.

Her husband said: “I told her I would buy her a skydive for her 80th birthday and she said she would get me one for mine. We said why don’t we leave it for our diamond wedding anniversary?

“Once we had decided we told everyone so we couldn’t back out!”

Mr and Mrs Chambers, who have two daughters and seven grandchildren, both completed a three-page risk assessment with their doctors before being cleared to jump.

They travelled to Chiltern Park Airfield at about 9am on September 2 and underwent a 30-minute training session before the jump. Before taking off, they were weighed to make sure they were under the 15st limit.

Then they were both strapped to instructors from the London Parachute School and were joined in the plane by two other skydivers and cameramen who were recording their jumps.

Mrs Chambers said: “We were just having fun, chatting to the parachuters and photographers and looking at the scenery.”

The couple freefell for 7,000ft before deploying their parachutes for the remaining 5,000ft.

Mr Chambers said: “It went very quickly. You shuffle to the edge and there’s no time to think, you are gone and you just tumble through the air.

“The first chute is released and steadies you, then the cameraman appears in front of you and asks you to smile when you’re doing 120mph! It all happened so fast, I’m half inclined to go back and do it again!”

Mrs Chambers said: “I made a point of not looking down when we were falling but once the chute opened it was gorgeous.

“It was beautiful just to float through the air and see the scenery. It was a lovely day, sunny and warm.” The couple were greeted on the ground by 11 friends and family members, who joined them for a picnic.

They said many of their relatives thought they were “mad” but they were glad to have had the experience.

Mr Chambers said: “One of our friends called us ‘crazy loons’ and our grandson Adam said, ‘I can’t believe you nutters are doing this’.

“They all turned up to watch and when we got down they were clapping and cheering us.”

Mrs Chambers said: “My instructor Olga asked why we were doing it and when I told her it was our diamond wedding anniversary she threw her arms around me and gave me a hug.”

The couple said that this wasn’t even the most dangerous thing they’ve done as Mrs Chambers has been white-water rafting and her husband spent a week on a tall ship, where he would climb the rigging to the crow’s nest each day.

Mr Chambers said: “I don’t think we will go skydiving again but we might do wing-walking!”

The couple’s anniversary falls on Thursday and they will celebrate with a family dinner at the French Horn in Sonning a few days later.