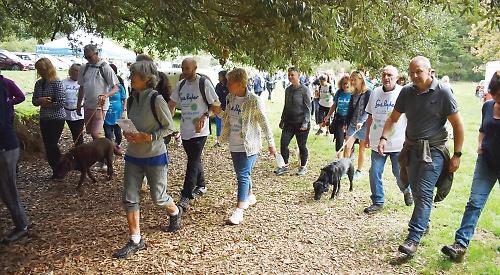 MORE than 200 people took part in a charity walk around Nettlebed to raise money for the Sue Ryder hospice.

The third annual Forget-Me-Not event on Sunday involved either a 5km or 10km walk.

The walkers included staff from the charity and relatives of patients cared for at Joyce Grove, which is due to close and be sold as the charity wants to concentrate on caring for more people at home.

They gathered in the grounds before walking through woodland around Highmoor and Nuffield and then returning.

Some participants wore special Sue Ryder T-shirts with the name of a loved one they were walking for on the back and many were accompanied by their dogs.

There were several teams of walkers including 12 staff and their families from Peppard builders Nicholas Bolt who were walking in memory of company founder Nicholas Bolt, who died at the hospice in June.

Director Emma Rennie said: “We love Sue Ryder and don’t think the hospice should close. It provides fantastic care and people want to be looked after at a hospice, not just at home.”

Tanya Hardy, from Hare Hatch, was one of more than 20 people who were walking in memory of her husband David, who died at the hospice in April.

These included their children Will and Charlotte, players and staff from Windsor Rugby Club and former colleagues in the RAF.

Mrs Hardy said: “My husband was 46 when he died of kidney cancer. We’ve got his work colleagues and family here today. We are hoping to raise a lot of money and that will be matched by DHL.”

Rosa Irwin, who was worked at the hospice for more than 30 years, was taking part in the walk for the first time and was joined by Sally Gee, who had a friend cared for at the hospice. Mrs Gee said: “Rosa has been here for a long time and I help out at the shop in Wallingford on Saturdays too. It’s good to give back to Sue Ryder as they do a great job.”

Mrs Crowe said: “As I work for the charity, I see what fantastic work they do.”

Kate Weakley, from Emmer Green, took part in the 10km walk in memory of her father Michael Mountford, who was cared for at Joyce Grove before his death nine years ago. She said: “The hospice is lovely, we couldn’t have asked for anything more.”

Michelle Brownlie and friends from Surrey walked in memory of her mother Suzanne May, who died at the hospice exactly four months ago on the day. Mrs Brownlie said: “Sue Ryder staff are amazing — they do everything with a smile on their faces and make illness more bearable.”

The walkers were served food and drink before they set off and when they got back and there were stalls raising funds for the charity, a tombola and face-painting for children.

Walkers could write a note on a Forget-Me-Not card and hang it on a special memorial tree.

The walk, which was sponsored by BBO Recruitment of Henley raised almost £10,000.

Gemma Wise, senior hospice fund-raiser, said: “It was brilliant. There were lots of tearful moments for people who had come along to remember loved ones but also lots of smiles and good memories.

“We had more than 200 walkers and the number is growing every year. A lot of families turned out en masse wearing the T-shirts.”