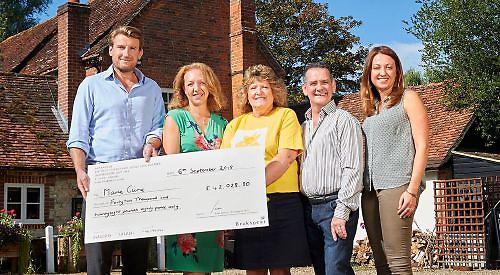 PUBS owned by Henley operator Brakspear have raised more than £42,000 for the Marie Curie nursing charity over the past 18 months.

All 130 of its premises across South Oxfordshire and further afield have been supporting the organisation, which supports patients with terminal illnesses and their families, since the company entered a partnership with the charity in March 2017.

Brakspear handed the money over at the Chequers in Berrick Salome, whose landlords Mark and Sandra Duggan, formerly of the Three Tuns in Henley, raised the highest total of £3,290.

Teams from the firm’s pubs and its head office in Bell Street, Henley, raised the sum in a variety of ways from collection tins at the bar to quizzes, beer festivals, golf days, live music events, raffles and auctions, Easter egg hunts, barbecues and family fun days.

Staff took part in challenges like the London Marathon and the RideLondon100 cycle race and many pubs encouraged customers to add voluntary donations to their orders.

The partnership was Brakspear’s second following a similar arrangement with Sue Ryder’s hospice at Joyce Grove in Nettlebed, which raised £50,983 between November 2015 and February last year.

Chief executive Tom Davies said, "This was our second estate-wide charity partnership and we're delighted that our pub and head office teams have again risen to the challenge and thrown themselves into fundraising for Marie Curie.

"Many of our licensees, staff and their customers have been touched by Marie Curie at times of need and were keen to help a charity which, like our pubs, is at the heart of local communities. We're very proud to have collected this sum, which will enable Marie Curie to do more great work helping people living with terminal illnesses and their families."

Marie Curie senior partnership manager Helen Stock said, "We're grateful fo Brakspear for its fund-raising. Many of its teams put huge time and effort into organising events on top of the demands of running their pubs.

"The money they have raised will help us to care for more people affected by any terminal illness, providing emotional support and expert care to people when they need it most."

Mr Duggan said most of his money came from a garden party he held a year ago which included a silent auction and raffle.

He said: “Customers were happy to buy tickets knowing that all proceeds were going to Marie Curie. It's a charity with wide support and everyone knows the wonderful work they do locally.”