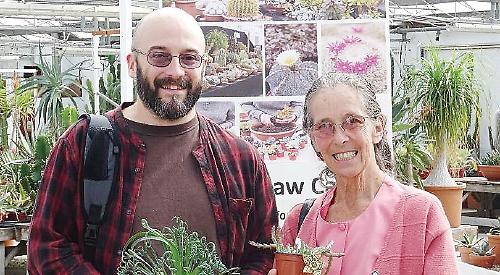 Daniel and Joanne Jackson, of Ottershaw Cacti, were selling their award-winning plants and offering advice to visitors on how to grow them.

The couple have won many awards, including a gold medal at this year’s Chelsea Flower Show.

Among the visitors was 89-year-old John Drew, who inherited his first collection of succulents, comprising 40 echinopsis, from his mother and now has his own collection of about 70 plants.

Mr Drew said: “I read in the paper that Daniel and Joanne were going to be here so I came specially to see them.”

Ann Dismukes, who was visiting with her son Steve, said: “I have been buying plants from Sheeplands for 25 years and am also a regular for lunch here.

“I can remember that when I first bought succulents they came straight from the greenhouse. Being able to meet the experts was an opportunity not to be missed.”

Above left, Daniel Jackson, holding a Crassula plant, with John Drew and Joanne Jackson and, above right, Steve and Ann Dismukes