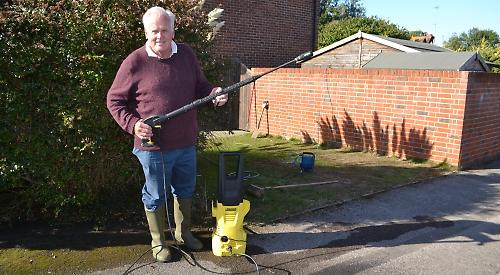 A MAN has taken to cleaning the pavements in his street himself after becoming frustrated at the condition they were left in after the installation of broadband cables.

Philip Meadowcroft uses a pressure washer to carry out the work in Watermans Way, Wargrave.

He says Virgin Media left the pavements streaked and discoloured when it cleaned them following the cable work last summer.

He has complained to the company, Wargrave Parish Council and Wokingham Borough Council but with little success, so he has now taken matters into his own hands.

Mr Meadowcroft said: “I equate it to clearing the pavements of snow and slush. It’s not high-tech.

“I’ll be doing a bit at a time on sunny days.

“People in the road are absolutely on my side. There is a lot of active folk here who work and elderly folk who are supportive in words but can’t come out and help. I’d be happy for anyone from Virgin’s contractor to come and have a look and be trained in how to do it.”

Neighbour Terry Forde said: “I’m very disappointed in everything about the cabling project, particularly because we haven’t actually been given the service yet.

“They have left a mess and their attempt to improve it when complaints were made was a failure.

“In fact, I think they made it worse. They zig-zagged over the top of everything and turned it into an eyesore.”

Mr Meadowcroft was unhappy with the condition of pavements after the cables were laid as the machines used to dig the trenches had expelled a sticky substance.

Virgin Media said initially that the deposit would be washed away by the rain before agreeing to clean the pavements in response to complaints. The work was carried out in November by a contractior using a pressure washer.

However, Mr Meadowcroft said the work was sub-standard as it had left streaks on the tarmac and the company should arrange for it to be done again.

After he complained to the borough council, it agreed to do the work but then said it was happy with the condition of the pavements.

Mr Meadowcroft also raised the issue at several parish council meetings and asked the village’s borough councillors John Halsall and Graham Howe to take it up.

Mr Meadowcroft said: “The parish council was approached and wrote to the borough council, which played a dead bat to it and maintaining the change of mind. It hasn’t articulated why it changed its mind.

“Our two borough councillors have both been requested to take it to the council but haven’t managed to speak to anybody about it yet.” Mr Meadowcroft told parish councillors at its latest meeting that he would be doing the work himself.

He said: “We are left with only one option and the residents are going to take matters into our own hands. We don’t have any legal issues as it’s like clearing the pavements of snow or ice.

“Virgin Media invested a lot of money in this village and have now walked away. I suggest that in future you get a copper-bottomed agreement that it will be perfect.”

Mr Meadowcroft said that to add insult to injury there was still no service from the cable network.

He said: “Virgin Media has dumped Wargrave after installing all this cabling and boxes.

“Is somebody going to take it over or is Virgin minded to come and dig it all back up?”

Virgin, which carried out the work as part of its Cable My Street initiative, has said previously that the borough council signed off on the condition of the pavements and the company had “no plans to return”.