We’re running in the rain 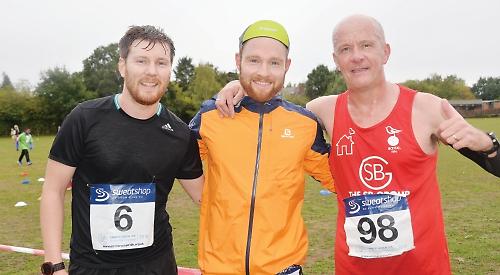 ABOUT 200 runners battled the elements when they took part in the second annual Emmer Green 10km.

Sunday’s event was hit by heavy rain and strong winds but still raised more than £5,000 for Emmer Green Primary School.

About 50 children took part in the accompanying Mini Oak Challenge, in which they ran 300m laps of the school playing field.

The main race started and finished at the school in Grove Road. The start was delayed for a few minutes due to a car being driven along St Barnabas Road, which is on the first part of the route out of the school.

Once they were underway the runners went along Gravel Hill and Tokers Green Lane to Kidmore End, through Bur Wood to Sonning Common and then through Chalkhouse Green back to the school via the footpaths at Reading Golf Club and Highdown Hill Road. The route included footpaths, fields and roads.

The race was won by Chris Shannon in 37 minutes and 56 seconds. He also took part last year when he finished fifth.

Mr Shannon, from Caversham, said: “It’s a really good course. It’s quite quick to start off with and then once you get off into the trails it’s just a really good run. It gets your legs ticking over.

“Last year it was too hot but this year with the rain it was quite nice. You want a bit of mud on your legs when you’re on the trails. That’s what it’s all about.

“It was a close race for the first 7km but I always try to go out as fast as I can then run people off. It was close all the way through and they were always on my shoulder.”

The runner-up was Daniel Ashworth, from Reading, and third was Ben Martin-Dye, from Bracknell. Both men finished about a minute behind the winner.

The first woman home was Jodie Penny in a time of 47 minutes and 33 seconds.

Race organiser Karen Allen said about 50 more people took part in this year’s race compared with the first event and many of them were serious runners.

“I think word got out it was a challenging course,” she said. “We have had very positive feedback despite the weather.

“I was really pleased with how it went overall. Some of the kids did amazingly well and ran more than 10km. We will definitely be holding it again next year.”

Mrs Allen, who has two daughters at the school, Sophie, nine, and Brooke, seven, founded the event as she is a runner who trains in the area. She said: “We did not have a race locally and it seemed a good way of raising money without having to do too much.

“You don’t have to put on entertainment as people come for a run, a cup of tea and then they go home. It’s also a good lesson for the kids, to get them out and doing something active.

“I’m a runner and this is my regular route. We are in the perfect place for an event by being on the edge of the countryside. ”

Both her daughters ran more than 10km by participating in the Mini Oak Challenge.

The event proceeds will go towards sports and computer equipment or any other needs.

Mrs Allen said: “We’d like as much money as possible to go towards sports equipment as it’s a sporting event.”

• The full results and more pictures will be published in next week’s Henley Standard.