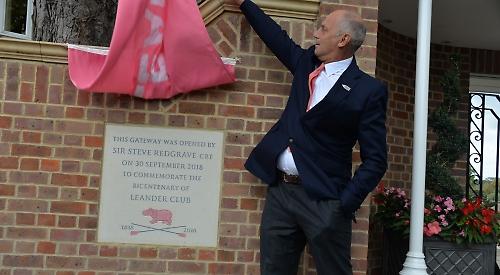 A NEW entrance gate to Leander Club in Henley has been opened as part of its 200th anniversary celebrations.

Five-time Olympic gold medallist and club member Sir Steve Redgrave unveiled a plaque set into a wall next to the entrance on Sunday.

He, along with club president Jeremy Randall, then officially opened the new gates before inviting a crowd of more than 100 people through the archway to enjoy cake and sparkling wine.

The new entrance is about twice the width of the old one with a double gate bearing the club’s insignia and two metal plates inscribed with the years 1818 and 2018.

Work to demolish the old flat canopy, which was built before the Second World War, began in January as Sir Steve knocked out the first three bricks of the structure using a sledgehammer.

He said: “It’s an honour to be here. I thought the honour was actually getting the sledgehammer to knock it down in the first place.

“I’m from a building family and the bit I used to like was the knocking down of the building.

“Jeremy talked about cracks and there were also quite big chunks taken out of the brickwork. It was quite difficult getting boats in and out of the club to the back of the car park. Some of the brickwork damage was my single scull.

“Now that I don’t train as often, or at all, I’m really pleased the gate is bigger than it was – because so am I!”

Sir Steve, who is also chairman of Henley Royal Regatta, paid tribute to the club in its bicentenary year saying it was in a "fantastic" position both on and off the water.

“Two hundred wins at Henley Royal Regatta just speaks for itself," he said. “The club had still got very big ambitions within the sport.

“The whole rowing world knows Leander Club, what it stands for and what it’s trying to do for the sport.”

After the opening ceremony Mr Randall cut the cake which decorated with an edible image of the entrance.

He thanked the crowd for their support and added: “We could not have done this project without your generosity.

“It has been well worth it. You have to leave a legacy and the legacy of our bicentenary will be this entrance.

“The other one was inadequate, it was too narrow and it was badly cracked and now we have another one that will last another 200 years.”

He also thanked Sir Steve calling him the ‘face of Leander’.

Club captain Vicky Thornley who attended the opening, added: “It looks really, really smart and it sets the scene as you enter the club.

“It will be a bit easier to get boats in and out than it was before.

“It seems fitting that we have invested in a nice entrance in such a special year.”

Other events to mark the bicentenary have included the creation of 200 papier-mâché hippos - the club's symbol - decorated by schools, businesses and community groups to help celebrate the milestone.

They were exhibited at the town’s River & Rowing Museum in May, then put on public display at various locations over the summer before being reunited at the club after the royal regatta.

It has also produced a commemorative book called The First 200 Years which was unveiled in front of more than 100 members and guests at 11 Downing Street in January.

The club will round off the celebrations with a bicentenary banquet in London Guildhall on Wednesday (10).